Christianists Scramble to Rake In Anti-Gay Money While It Lasts 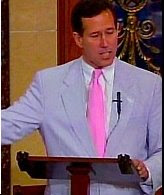 Just recently I posted about the increasing hysteria among the Christianists who have made a very comfortable living off of peddling dire warnings of the end of civilization posed by gay marriage to the ignorant and bigoted. Increasingly, they seem to realize that should Proposition 8 be defeated in California on November 4, 2008, it will be only a matter of time before same-sex marriage becomes legal all across the country. Of course, if that happens, all of the millions of dollars they have raked in by posturing and advertising themselves as the bulwark "protecting marriage" will be a thing of the past and - oh heavens - they might have to get real jobs. That prospect probably frightens them far more that two guys being legally married. A prime example of the level of hysteria and the underlying desire to collect every dollar while they can is embodied by a special alert sent out by National Organization for Marriage via Human Events featuring former Senator Rick Santorum (who lost his Senate seat I believe in large part because of his whacked out obsession with gay sex). Ricky boy - who looks pretty gay himself in his powder blue suit and pink tie - gets pretty close to foaming at the mouth. Here are some highlights via Pam's House Blend:
*
Unless we act today, we will lose the battle for marriage--not a decade from now, not "someday," but quite possibly in the next few months. . . . Four California judges endorsed two big, very bad ideas. First, they extended the internationally recognized human right to marry to include same-sex marriage. . . . The second big idea endorsed by the California court is even less promising: sexual orientation should be treated just like race under the California equal protection amendment, subject to "strict scrutiny."
*
That's why I need you to act today. Use this hyperlink to help launch the National Organization for Marriage's 2008 State Action Plan, including a sophisticated issue ad campaign--radio, TV, and print ads to drive home the point: don't mess with marriage. If we don't fight back, our children and grandchildren will get harmful and confusing messages about marriage, including this one: there's no difference between same-sex and opposite-sex unions and anyone who defends marriage is a bigot.
*
Use this hyperlink to make a generous donation of $35, $50, or even $100 today. These gay marriage activists know the marriage battle will be won or lost in state legislatures. And because they know that state legislatures are our farm team for the next generation of passionate pro-family leaders that's who the gay donors are targeting.
*
And so with great hope and excitement, I learned about the launch of The National Organization for Marriage's 2008 State Action Plan. Will you give a generous donation today to help ensure the plan succeeds?
*
I'm not sure what little Ricky has been doing since he got tossed out by the voters in 2006. I can say this, however, he knows about bigots - he sees one in the mirror each time he looks in a mirror.
Posted by Michael-in-Norfolk at Thursday, August 14, 2008