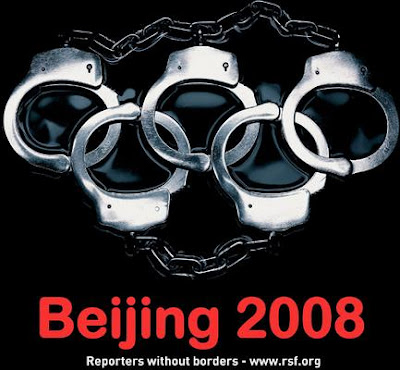 In order to showcase its falsely harmonious society, the government in China - as most dictatorships do - has rounded up anyone who might express anything less that an air of sweetness and light favored by the ruling Communist Party. Among those targeted are various religious factions, many of which just merely seek to be left alone and allowed to practice their faith with little involvement with the government. Yes, it is true that I rail against religious organizations and denominations frequently,. But that's not because I don't favor freedom of religion - or freedom from religion if that is what one wants - for all. My issue is when the theocrats want to start injecting their beliefs into the political system and/or want secular civil legal rights doled out based upon compliance with wingnut theocratic religious beliefs, the Christianist jihad against gays being a prime example. I continue to believe that it was a very bad idea to hold the 2008 Summer Games in Beijing since all that is accomplished is lending legitimacy to the dictatorial Communist Party. Here are highlights from a Washington Post story:
*
But religious freedom does not extend beyond the heavily secured perimeter fence of the Olympic Green. In this Olympic year, government officials have sharply tightened restrictions on religion, arresting leaders of unregistered "house churches," stepping up harassment of congregations, denying visas to foreign missionaries and shutting down places of worship, church members and religious activists said.
*
The crackdown is part of a security campaign that has targeted human rights advocates, domestic dissidents and petitioners -- anyone who might interfere with the ruling Communist Party's efforts to showcase China as a harmonious society in which the government maintains a firm grip on power.
*
"How can this be called a harmonious society? If it's harmonious, we'd have a right to stay in Beijing and attend the Olympics," said Zhang Mingxuan, a house church pastor and activist who was kicked out of the capital by police recently, temporarily detained Sunday and then arrested again by public security police in Henan province Thursday. . . . "To open religious services and make some literature available to a limited number of people during the Olympics is a welcome thing, but it means nothing in terms of religious freedom in China,"
*
"An important reason for the crackdown is the Olympics. This year, Chinese leaders face more pressure from outside groups, house churches and even ordinary individual citizens," said Fan Yafeng, a law professor at the Institute of Law at the Chinese Academy of Social Sciences and a leader of the 80-member Sina house church. "The Public Security Bureau always misuses its power. . . . They have lost their humanity."
*
"In the Olympic Village, you can find religious freedom. Maybe some foreigners can worship," Fan said. "But I tell you, the real crisis in China now is that there are no reformers left. The power struggle among the leadership is for power, not reform. To have real political reform, they would lose their power."
Posted by Michael-in-Norfolk at Sunday, August 10, 2008