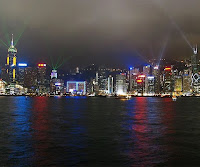 Thomas Friedman has a timely column in today's New York Times that is a bookend to what Hillary Clinton said last night about the challenges and changes in direction that must be addressed by the next president. John McCain is clearly not up to the job because he doesn't seem to even realize that major changes and reinvestment in America are needed. Perhaps he doesn't see the need because he's always staying at one of his family's posh mansions or fabulous condos. The problems are real and Friedman's column highlights just how essential it is that America wake up and fix its own house if it is to avoid fallen to a fallen power status. The choices are clear. Will Americans close their eyes and elect McCain and his anti-knowledge Christianist party to take us backwards in time or elect Obama and act for the future? Here are some column highlights:
*
After attending the spectacular closing ceremony at the Beijing Olympics and feeling the vibrations from hundreds of Chinese drummers pulsating in my own chest, I was tempted to conclude two things: “Holy mackerel, the energy coming out of this country is unrivaled.” And, two: “We are so cooked. Start teaching your kids Mandarin.”
*
[A]s snapshots go, the one China presented through the Olympics was enormously powerful — and it’s one that Americans need to reflect upon this election season. China did not build the magnificent $43 billion infrastructure for these games, or put on the unparalleled opening and closing ceremonies, simply by the dumb luck of discovering oil. No, it was the culmination of seven years of national investment, planning, concentrated state power, national mobilization and hard work.
*
I couldn’t help but reflect on how China and America have spent the last seven years: China has been preparing for the Olympics; we’ve been preparing for Al Qaeda. They’ve been building better stadiums, subways, airports, roads and parks. And we’ve been building better metal detectors, armored Humvees and pilotless drones.
*
The difference is starting to show. Just compare arriving at La Guardia’s dumpy terminal in New York City and driving through the crumbling infrastructure into Manhattan with arriving at Shanghai’s sleek airport and taking the 220-mile-per-hour magnetic levitation train, which uses electromagnetic propulsion instead of steel wheels and tracks, to get to town in a blink. Then ask yourself: Who is living in the third world country?
*
But the first rule of holes is that when you’re in one, stop digging. When you see how much modern infrastructure has been built in China since 2001, under the banner of the Olympics, and you see how much infrastructure has been postponed in America since 2001, under the banner of the war on terrorism, it’s clear that the next seven years need to be devoted to nation-building in America.
*
Obama got this far because many voters projected onto him that he could be the leader of an American renewal. They know we need nation-building at home now — not in Iraq, not in Afghanistan, not in Georgia, but in America. Obama cannot lose that theme. He cannot let Republicans make this election about who is tough enough to stand up to Russia or bin Laden.
*
Obama is more right than he knows when he proclaims that this is “our” moment, this is “our” time. But it is our time to get back to work on the only home we have, our time for nation-building in America. I never want to tell my girls — and I’m sure Obama feels the same about his — that they have to go to China to see the future.
Posted by Michael-in-Norfolk at Wednesday, August 27, 2008