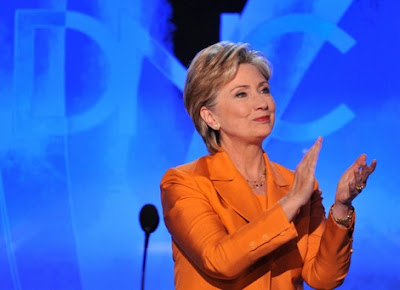 Regular readers of this blog know that I am no fan of Hillary Rodham Clinton and certainly did not support her candidacy during the primary contests. Nevertheless, HRC gave a tremendous speech tonight seeking to unify the Democrats to go forward and defeat John McCain and the forces of division, intolerance and rights and privileges for the few. She did a wonderful job and for a few moments - just a few, believe me - I thought that had she given more speech like the one tonight during the primaries she might have won.
*
One other thing that caught my attention during tonight's speech was that Hillary actually said the word "gay" in front of the entire convention crowd and on national television. During the primaries, Hillary seemed unable and/or unwilling time and time again to utter the word gay. Thank you for acknowledging that we exist and that we deserve equal civil rights.
*
I was also happy to see that Hillary laid out a clear reason why her supporters should jump on board and help make sure Obama wins in November. She made it very clear that a vote for McCain is a vote against everything that Hillary fought for during the primary battles. I truly shudder to contemplate what will happen to the nation should McCain somehow win in November. The word "emigrate" definitely springs to thought.
Posted by Michael-in-Norfolk at Tuesday, August 26, 2008