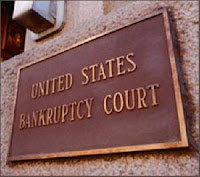 As the presidential campaign rhetoric picks up this week it is telling that John McCain still doesn't get it when it comes to what is happening to many formerly middle class families. As the the Los Angeles Times is reporting, the number of individuals filing bankruptcy is up by nearly a third from a year ago. I know that a number of my clients who were very prosperous as recently as two years ago have now been forced to seek Chapter 13 protections or have placed their businesses into Chapter 7 because of the fall out from the collapse of the real estate market. Even though the new bankruptcy code makes it harder for people to file, the number of filings is up. The economy IS BAD whether or not McCain notices it as he travels from one of his wife's mansions to the next. Here are some story highlights:
*
NEW YORK -- Nearly 1 million individuals and businesses filed bankruptcy in the 12 months ended June 30, according to U.S. Bankruptcy Court data released Wednesday.There were 967,831 bankruptcy cases filed since July 1, 2007, up 28.9% from the prior 12 months, when cases totaled 751,056.
*
Nonbusiness filings made up 96.5% of the bankruptcies nationwide, totaling 934,009. Of those cases 592,376 were Chapter 7 filings, which involve liquidation of nonprotected assets, such as family homes. The total also included 340,852 filings for Chapter 13 protection, which allows individuals to reorganize their finances and pay down their debt.
*
Another economic report Wednesday found that U.S. thrifts lost $5.4 billion in the second quarter and set aside a record amount to cover losses from bad mortgages and other loans.Data from the U.S. Office of Thrift Supervision showed federally insured savings and loans posted their second-largest quarterly loss ever in the April-June period, after the $8.8-billion loss in the fourth quarter of last year.
Posted by Michael-in-Norfolk at Thursday, August 28, 2008