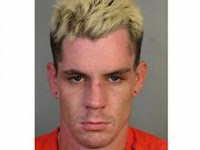 My one time New Orleans belle grandmother had no use for racists and white trash, the latter being what she considered the lowest form of life. As a child I recall be out shopping with her one time and she dressed down someone for a racist comment. The Rocky Mountain News is reporting a purported plot by what appear from their looks to be loser white trash types - the type who only feel good about themselves by hating and looking down on others be they blacks, gays or some other group. As Jacob Weisberg has noted in Newsweek recently, the reason Obama isn't ahead right now is that he trails badly among one group, older white voters. He lags with them for a simple reason: the color of his skin. Personally, this mind set disgusts me, all the more so because I'm sure the majority of these haters view themselves as good Christians. Here are some highlights from the Rocky Mountain News:
*
AURORA — The U.S. Attorney for Colorado said authorities are "absolutely confident" three men arrested on weapons and drug charges posed no threat to presumptive Democratic presidential nominee Barack Obama. . . . Earlier Monday, CBS4 News reported that at least three people had been arrested in connection with a possible plot to kill Obama at his Thursday night acceptance speech at Invesco Field at Mile High.
*
CBS4 had reported one of the suspects told authorities that they were "going to shoot Obama from a high vantage point using a ... rifle … sighted at 750 yards." Law-enforcement sources told CBS4 that one of the suspects "was directly asked if they had come to Denver to kill Obama. He responded in the affirmative." A second source told CBS4 News that they are concerned they may have come upon a possible "assasination plot."
*
As far as the larger cloud of racism that still plagues this country all these years after Martin Luther King's assassination, here are a few highlights from Weisberg's column:
*
Such prejudice usually comes coded in distortions about Obama and his background. To the willfully ignorant, he's a secret Muslim married to a black-power radical. Or—thanks, Geraldine Ferraro—he got where he is only because of the special treatment accorded those lucky enough to be born with African blood. Some Jews assume Obama is insufficiently supportive of Israel, the way they assume other black politicians to be. To some white voters (14 percent in the CBS/New York Times poll), Obama is someone who as president would favor blacks over whites. Or he's an "elitist," who cannot understand ordinary (read: white) people because he isn't one of them. We're just not comfortable with, you know, a Hawaiian.
*
Then there's the overt stuff. In May, Pat Buchanan, who frets about the European-Americans losing control of their country, ranted on MSNBC in defense of white West Virginians voting on the basis of racial solidarity.
*
If Obama loses, our children will grow up thinking of equal opportunity as a myth. His defeat would say that when handed a perfect opportunity to put the worst part of our history behind us, we chose not to. In this event, the world's judgment will be severe and inescapable: the United States had its day, but in the end couldn't put its own self-interest ahead of its crazy irrationality over race.
*
You may or may not agree with Obama's policy prescriptions, but they are, by and large, serious attempts to deal with the biggest issues we face: a failing health-care system, oil dependency, income stagnation and climate change. To the rest of the world, a rejection of the promise he represents wouldn't just be an odd choice by the United States. It would be taken for what it would be: sign and symptom of a nation's historical decline.
Posted by Michael-in-Norfolk at Tuesday, August 26, 2008