The New York Times has an article that looks at the challenges of teaching evolution and other legitimate science education courses in the face of the ongoing efforts of Christianists and Creationists to dumb down school curriculum to satisfy their whacked out religious beliefs and literal interpretation of the Book of Genesis. Some states are trying to resist these anti-knowledge efforts but the outcome is perilously dependent on voters getting out and voting against Christianist candidates. In today's global economy and information age, it is imperative that the USA and other western nations maintain first class, science based educational systems in order to insure future economic prosperity. The Dark Ages are proof that knowledge can be lost when the forces of ignorance and religious fanaticism are allowed to prevail. Here are highlights from the NYT article:
*
ORANGE PARK, Fla. — David Campbell switched on the overhead projector and wrote “Evolution” in the rectangle of light on the screen. He scanned the faces of the sophomores in his Biology I class. Many of them, he knew from years of teaching high school in this Jacksonville suburb, had been raised to take the biblical creation story as fact.
*
In February, the Florida Department of Education modified its standards to explicitly require, for the first time, the state’s public schools to teach evolution, calling it “the organizing principle of life science.” Spurred in part by legal rulings against school districts seeking to favor religious versions of natural history, over a dozen other states have also given more emphasis in recent years to what has long been the scientific consensus: that all of the diverse life forms on Earth descended from a common ancestor, through a process of mutation and natural selection, over billions of years.
*
But in a nation where evangelical Protestantism and other religious traditions stress a literal reading of the biblical description of God’s individually creating each species, students often arrive at school fearing that evolution, and perhaps science itself, is hostile to their faith. 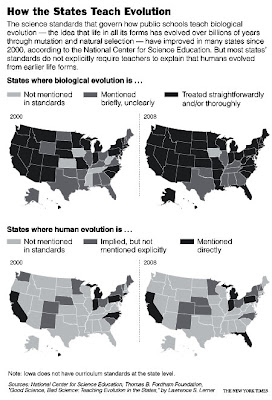