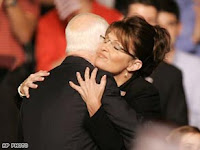 I have spent a goodly amount of time pondering John McSenile's pick for the Vice President slot on the GOP ticket. I guess I am baffled because McSenile and the GOP minions have relentlessly complained that Obama lacks foreign policy experience, etc., yet McSenile then proceeds to select a running mate with ZERO foreign policy experience and who has served only two years as governor of a state with a smaller population that numerous cities around the country. Here are a few facts on Alaska:
*
In 2006 Alaska had an estimated population of 670,053 and ranked 48th out of 50 states by population. Alaska is the least densely populated state, at 0.42 people per square kilometer (1.1 per square mile), with the next state, Wyoming, at 1.97 (5.1 per square mile).
*
For a frame of reference, the cities of Norfolk and Virginia Beach combined have a larger population that Alaska and the Hampton Roads area as a whole has two and one half times the population of Alaska. Thus, whatever "executive experience" Ms. Palin may have, the mayors of MANY cities in the USA have more arguably have more experience since they represent larger populations. I would also add that we all know what the nation received from Wyoming in the former of Emperor Palpatine Cheney. Do we really want another small state mindset at this level of government?
*
In addition to her utter lack of experience, Palin seems to have some potential ethical issues (have you noticed how the candidates of God's party on a whole always seem to have more ethical/moral issues in their personal lives than the allegedly Godless Democrats?). As CNN reports, it is said that Palin abused her power as governor to fire a state official who would not fire Palin's former brother-in-law who has divorced Palin's sister:
*
[S]he is under investigation for her firing of a state official, Public Safety Commissioner Walt Monegan. She has been instructed to hand over documents and recordings of telephone conversations as part of the inquiry, which grew out of allegations that she sacked Monegan for refusing to fire her former brother-in-law from the state police. She has denied wrongdoing.
*
But Palin acknowledged that a member of her staff made a call to a trooper in which the staffer suggested that he was speaking for the governor. Palin has admitted that the call could be interpreted as pressure to fire state trooper Mike Wooten, who was locked in a child-custody battle with Palin's sister. She suspended the staffer who made the call.
*
Seems a bit odd to me that a staffer would take it upon them self to make such a phone call. Putting aside her possible abuse of power, Palin is also troubling because she appears to be a Kool-Aid drinking member of the Christian Right. She has even gone so far as to state that Creationism - p i.e., religion - should be taught in the public schools. Here are highlights from the Anchorage daily News:
*
The volatile issue of teaching creation science in public schools popped up in the Alaska governor's race this week when Republican Sarah Palin said she thinks creationism should be taught alongside evolution in the state's public classrooms.
*
The teaching of creationism, which relies on the biblical account of the creation of life, has been ruled by the U.S. Supreme Court as an unconstitutional injection of religion into public education.
*
No wonder the Christianist base of the GOP is elated with Palin as the VP candidate, particularly since she's anti-abortion and supports an anti-gay amendment to the Constitution.
Posted by Michael-in-Norfolk at Friday, August 29, 2008