UPDATED: Now The Hill is reporting that Washington Archbishop Donald W. Wuerl (pictured at left) is piling on Catholic politicians with his criticism of House Speaker Nancy Pelosi, a Catholic, for not voting as dictated by the Vatican and hypocrites like himself. Here's what the Dallas Morning News had to say about the good archbishop when he was bishop of Pittsburgh:
*
Early this year [2002], he [Wuerl] removed from ministry several priests he had allowed to keep working in spite of "credible" abuse allegations. The bishop and his spokesman would not identify the men or say how many there were or characterize the accusations. The priests had been kept on the job after church investigators could not substantiate the claims against them, a diocesan spokesman said. Now, he explained, "we raised the bar."
*
As the parent of three children, that these effete celibate "princes of the Church" cared nothing for children and youths disgusts me beyond description. Wuerl should be defrocked himself and publicly horsewhipped or worse. It is rather telling that Wuerl only acted to remove these priests AFTER the sex abuse scandal in Boston blew up in a huge fireball, thus bring scrutiny to other diocese. As is the norm, the then bishop appears to have chosen to protect predatory priests as opposed to children and youth.
*
*
The disgustingly corrupt Roman Catholic Church hierarchy continues to take pot shots at Catholic politicians who vote as their constituents want them to vote. The latest example is windbag Archbishop Charles Chaput of Denver (pictured at left and looking like a real queen) who is bleating ab 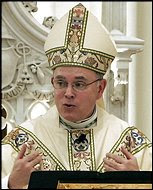 out Joe Biden needing to avoid taking Communion as a result of his pro-choice stand on abortion. Naturally, Chaput is SILENT on the need for the resignation of all his fellow bishops and cardinals who have covered up and/or facilitated the sexual molestation of minors.
*
Why the news media even gives these phony hypocrites a drop of ink or news coverage is disappointing. Would that every article quoting these falsely pious frauds would be required to contain a brief paragraph reminding readers/listeners that two thirds (2/3) of the Catholic bishops were implicated in cover ups of sexual abuse of minors by Catholic clergy. As for the Catholic laity that continues to listen to these hypocrites, I think sheep and lemmings display a higher degree of intelligence. Here are some highlights from the GOP mouth piece Washington Times:
*
DENVER Sen. Joseph R. Biden Jr. arrived at the Democratic National Convention on Monday amid rumblings over whether his pro-choice Catholicism would help or hurt the Democratic ticket.
*
Although he represents Delaware in the Senate, Mr. Biden grew up in Pennsylvania, a must-win state for Democrats in November. But the party's hopes of winning the critical Catholic vote took a hit Sunday when Archbishop Charles Chaput of Denver said Mr. Biden should avoid taking Communion as a result of his pro-choice stand on abortion.
*
The archbishop, who was not invited to speak at any convention events in what appeared to be a deliberate snub, told the Associated Press that he would like to speak privately with Mr. Biden.
The debate underscored what has emerged as a central theme of this year's convention: the tension between the Democratic Party's renewed outreach to religious voters and its long-standing support for unfettered access to abortion.
*
Fortunately, more and more Catholics ARE catching on to the hypocrisy of the Church hierarchy and pick and choose what they will adhere to and ignore from the fiats issued by the out of touch Vatican and its swarms of old queens in dresses. I hope Chaput's remarks are disregarded by thinking Catholics. P.S. For the record, I am not pro-abortion. However, the CIVIL laws should not be based on the religious views of a minority.
Posted by Michael-in-Norfolk at Tuesday, August 26, 2008

"swarms of old queens in dresses". LOL Thank you so much. I needed something to lighten the day!

Everything that comes from the mouthpieces of the church (catholic or otherwise) should have disclaimers.