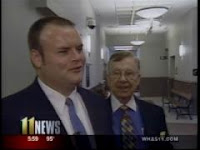 Back on December 17, 2007, I did a post regarding sex abuse allegations against various SBC related individuals. One of the individuals named was 25 year old Clayton Pruett, a youth pastor at Pleasant Grove Baptist Church, who was accused of molesting a girl by the girl's mother. It has now turned out that the charges were totally false and Clayton Pruett has been cleared of any wrong doing. Clayton brought this development to my attention and I apologize for any anguish my post may have caused him.
*
As regular readers know, I take a hard line with the strongly anti-gay Southern Baptist Convention ("SBC") and Roman Catholic Church both of which persecute gays and meanwhile have a terrible record of covering up if not outright facilitating the sexual abuse of minors. I try to make a point of the hypocrisy and try to expose their dirty linen. The post mentioning Clayton - which has now been edited to remove all references to him - was one of an ongoing series that exposes the misdeeds of the SBC.
*
Here are highlights from WHAS-TV 11 about the dismissal of all charges:
*
(WHAS11) - Clayton Pruett got a little piece of his life back. . . . Clayton Pruett said, “It feels great it can show everybody what we’ve known all a long.” A signed statement tonight says that sex abuse allegations against a Bullitt county youth pastor were all made up. The mother of the accuser signed that statement today, clearing the name of Pastor Clayton Pruett.
*
The mother is Debra Johnson and until recently she was a member of the Bullitt County School Board; she’s been charged with a felony before. She’s now left town and is living in Arkansas. The Bullitt County youth pastor at Pleasant Grove Baptist Church always maintained his innocence and now says he has proof.
*
Clayton Pruett said, “It’s been so tough because you don’t escape this you live with it everyday now I feel like I can put it to rest.” This settlement order was filed in court today. In the statement it says Debra Johnson’s complaints to police about Pruett abusing her daughter were false. It also says Johnson regrets having made such statements. It goes on to say Pruett has committed no crime.
*
Here's a portion of the note I received from Clayton Pruett for whom I only wish the best and that he can put this terrible experience behind him:
*
I wanted to thank you for bringing child abuse to the conscience of people across the nation because it is a horrible crime and needs to have more action to stop those who would take advantage of children in any way. I have a retraction from the mother who had accused me of abusing her child and she states that she in fact lied about the entire thing. It is my hope that you also realize that not everyone who is charged with these horrible crimes are guilty of them. In addition the school has given me back my job as a substitute teacher and as assistant wrestling coach because they found nothing in the complaints filed against me. I would ask that you remove all press concerning this situation because it puts a horrible mark on my life that I do not deserve and I will not stop until my name is without blemish. . . . All I ask is that you please remove this from your site and allow me to have my life back. I have never hurt a child nor would I ever. So please help me get justice for those who would use the system for their benefit instead of protecting our children. Thank you for your time.
Posted by Michael-in-Norfolk at Monday, August 25, 2008

And where's Clayton Pruett when people make false accusations on others?

I don't get your comment, he has been falsely accussed why does he have to be anywhere? The guy didn't have a problem with real pretadors being called out for the scum they are. He just wanted his name clear. That's why people the world is so messed up people speak from their pain instead of listening to others. If I was this guy I would be angry and hate the world.

Looking elsewhere, it appears that Pruett was threatening to sue Michael (and others?) with slander if they didn't remove the postings, not because he wanted to clear his name.