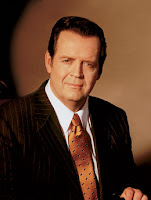 Every LGBT citizen should feel the hair on the back of their neck raise up at the news that the Southern Baptist Convention ("SBC") - an organization as corrupt in its handling of sex abuse by clergy and as contemptuous of the separation of church and state as the Vatican - is launching an effort to get its gay-hating members out to the polls in November. The effort will run from September 24th through November 2nd, two days before the general election. All as the GOP works on an anti-gay plank for its platform going into the fall election. As Hillary Clinton said last night, it is crucial that John McCain and the policies of the Bush regime be defeated, not just in the interests of gay rights but for many other reasons. Richard Land, head of the Ethics and Religious Liberty Commission (liberty that is for only those who live by the SBC religious beliefs), is an ardent opponent of gay rights and leading Christo-fascist. He and those like him truly scare me - I believe he views gay Americans as a vermin to be exterminated or at minimum driven into hiding. Here are highlights from the Washington Post:
*
Southern Baptists are organizing a nationwide prayer campaign to accompany their values-voter registration drive, seeking spiritual renewal for families and churches, and God's favor for public officials who are guided by the Bible. . . . The effort . . . is jointly led this year by Southern Baptists, the largest Protestant group in the country, and the Family Research Council, a conservative Washington-based advocacy group.
*
The Rev. Richard Land, head of the Ethics & Religious Liberty Commission, the public policy arm of the 16.3 million-member Southern Baptist Convention, said Tuesday that more than 1,300 churches have signed up for the prayer campaign so far.
*
"Our vision statement is an American society that affirms and practices Judeo-Christian values rooted in biblical authority," Land said. "America will be better off if people who are voting are seeking God's guidance."
Posted by Michael-in-Norfolk at Wednesday, August 27, 2008