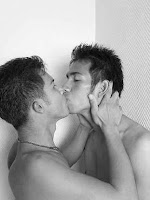 One of the smears that the anti-gay Christianist throw at gays is that gay relationships are unstable and/or that gays are unable/unwilling to be faithfully monogamous. Of course meanwhile, they do everything in their power to undermine gay relationships and make sure they have no recognized legal status. If anything, I believe it's amazing how many stable, long last gay relationships manage to endure given all the negatives that are working against them. A new story in The Advocate is reporting what to me ought to be self-evident: Same-sex couples in legally recognized relationships stay in their relationships longer than those who are not legally recognized. Hello, why is this a surprise? Personally, I think the Christianists are afraid that broadly available marriage rights for same-sex couples will demonstrate that gays are as stable in relationships as their heterosexual counterparts. Should this occur, the Christianists lose yet another stone to throw at LGBT citizens. Here are some highlights:
*
Same-sex couples in legally bound relationships appear to stay in their relationships longer than those who are not legally recognized, according to a new study published in Developmental Psychology.
*
Robert-Jay Green, executive director of LGBT research organization Rockway Institute, said the study shows that civil union status itself may help preserve relationships. "There are many ways that a legal couple status may support a relationship -- more family understanding, acceptance by friends and coworkers, greater commitment that results from a public declaration, and enhanced legal protections in the form of health care benefits and community property," Green said in a statement on Tuesday.
*
About 9% of same-sex couples not in civil unions ended their relationship, while only 3.8% of same-sex couples in a civil union ended their relationships. The study was conducted by Kimberly F. Balsam and Theodore P. Beauchaine of the University of Washington, Esther D. Rothblum of San Diego State University, and Sondra E. Solomon of the University of Vermont.
Posted by Michael-in-Norfolk at Wednesday, August 27, 2008