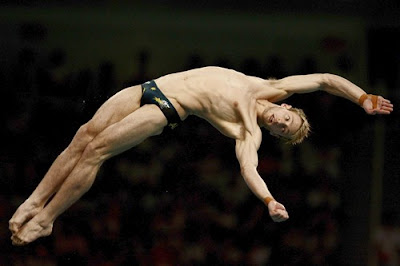 Sadly, few of the media outlets that have reported on Matthew Mitchum's amazing gold medal win that prevented a total sweep by China have mentioned that he's gay or that he had a partner in the stands. As Out Sports reflected"
*
If he had had cancer, or if his parents had been killed in a car crash when he was 2, or if he had just proposed to his girlfriend, they would have mentioned it. But they never showed him hugging his boyfriend, never mentioned it. They referred to "personal problems," but I'm afraid they decided Matthew's sexuality was off limits. A real shame.
*
But a few did discuss his sexuality - it is after all a part of his story just like the lives of other gold medalist that have their families spotlighted - including the Guardian. Here are some highlights:
*
BEIJING, Aug 23 (Reuters) - Matthew Mitcham did two surprising things in Beijing. He scooped a gold medal from the apparently invincible Chinese diving team and told anyone who asked that he is gay. Two years ago the 20-year-old was not even diving. He had retired, burnt out by years of dedication to a gruelling sport, but came back for shot at gold.
*
"Everything, absolutely everything I have done, has been for this," he said. "Now it's happened and I never thought it would." Mitcham broke down in tears after a nearly perfect last dive edged him above the Chinese favourite into top place. It was the eighth and last medal in a sport that the host nation utterly dominates and was expected to sweep.
*
"Matthew Mitcham today was absolutely fantastic and I am so glad that a non-Chinese person won," said young British rival Thomas Daley, after the Australian's win raised the spirits of foreign divers who had seemed doomed to only second-best.
*
He is as fearless in his personal life as he is on the board. Mitcham has been open about his sexuality, the only man among 10,500 Olympic athletes to publicly say he is gay, according to a study by a gay sports website. Many gay athletes fear coming out could bring disapproval from fans and teammates or jeopardise sponsorship deals that are a vital source of funding,
*
Mitcham has said he wants to be known only as a great Australian diver. "Being gay and diving are completely separate parts of my life," he told journalists. "I'm happy with myself the way I am."
Posted by Michael-in-Norfolk at Sunday, August 24, 2008