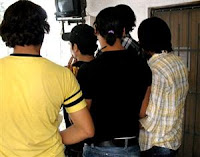 "Don't Ask, Don't Tell, Do Kill" is the title of a new article in Newsweek magazine that looks at the horrific plight of gays in Iraq. Despite the US military presence, it appears to be open season for randomly ceasing and executing gay Iraqis who appear to have fared far better under the regime of Saddam Hussein notwithstanding all its brutality. What is happening to gay Iraqis is symptomatic of what happens when religious based fanaticism is allowed to run unchecked and/or creep into the civil laws. Unfortunately, the Chimperator's puppet government doesn't even want to acknowledge the atrocities taking place. Sadly, the mentality of the Iraqi death squads that are rounding up and killing gays is not exclusive to Islamic fundamentalist based on some of the comments to the article posted by American Christianists. As I had said before, I believe that too often religion - be it Christianity or Islam - is a malignant force for evil. Here are some highlights from Newsweek:
*
When militiamen from the Mahdi Army came by the compact, two-story stone home in the Doura neighborhood of Baghdad, they weren't looking for Sunnis to harass. They were hunting gays. "Bring us your son's cell phone," one ordered the middle-aged man who came to the gate. They wanted to check if his son, Nadir, had been calling foreigners . . . This time they left, but vowed to come back if they found any evidence he was gay--or was talking to undesirable foreigners. Now that Iraq's sectarian war has cooled off, it's open season on homosexuals and others who infuriate religious hardliners.
*
Iraqi authorities scoffed at the subject--when not scolding a reporter for even asking about it. Some of NEWSWEEK's own local staff were wary of the story. Virtually no government officials would sit for an interview. And the United Nations human-rights office, which has a big presence in Iraq, dodged the subject like a mine field.
*
[T]he policy in Iraq during Saddam Hussein's rule was "don't ask, don't tell." But that has changed. Iraqi LGBT, the London NGO that Nadir works for, says more than 430 gay men have been murdered in Iraq since 2003. For the country's beleaguered gays, it's a friendless landscape. Many officials say they feel that in a country at war, there are more pressing concerns than gay rights.
*
Saif, one of the older residents at an Iraqi LGBT house, recalls Saddam's repressive but secular regime wistfully. "Those were the most beautiful days of our lives," he says. "The fall [of Saddam] was the worst thing to happen." . . . . Most people seem to prefer that the subject just go away. A written request for an interview at the Legal Section of the Ministry of Human Rights was greeted with a suggestion to delete the word "gays." A sympathetic senior government official warned that a direct request to talk to a minister about gays could result in a short conversation.
*
Insisting that gays are just a few undesirable perverts who "should be killed"--as one Iraqi who works in journalism put it--encourages an atmosphere of impunity no matter the offense. Killing gays becomes "honorable." And raping them is OK because it isn't considered a homosexual act--only being penetrated or providing oral sex is.
*
Ali Hili [who secured asylum in Britain] says the government, security forces, judiciary and religious establishment are complicit in terrorizing gays.
*
As I indicated, the mentality of some in this country is little better. Illustrative of the comments posted by Christianist on the Newsweek article is this one which basically supports what is being done to gays in Iraq. Why do I think this jerk is a McCain supporter? Here's his comment (the misspellings are his):
*
Posted By: bobomack @ 08/27/2008 8:52:32 AM
Comment: Being gay is an unnatural act, although gays seem to glamorize their experience. The attraction 2 people of the same sex feel for eachother is against God's laws. Permitting gays to marry one another, as well as allowing gays to flaunt their homosexuality in public weakens any countries infastructure. Gays who adopt or raise children are sending the wrong message to our young people, and our society is weakened because of it. The Bible spells it out for us, It's Adam and Eve, not Adam and Steve. Homosexuality is a scourge on our society, and being gay is an obomination that needs to be punished as the crime it is.
Posted by Michael-in-Norfolk at Wednesday, August 27, 2008