Setting the Stage for a Possible Global Recession. 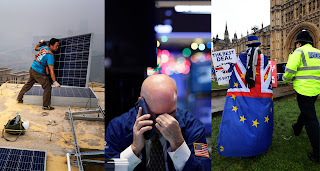 Racism and greed were, in my view, the main motivations for those who voted for Trump in 2016.  The racists were the angry whites fearful of lost white privilege while never looking in the mirror to see their own role in the plight.  The other group was comprised of the very wealthy and others of a similar mindset who want to horde their money and never contribute to the best interests of the nation.  Now, thanks to the actions of Der Trumpenführer - trade wars, tax cuts ballooning the federal deficit, and the government shutdown - , actions  of like minded anti-immigrant racists in the UK and other parts of Europe, and China's structural economic problems, these same people may be about to see the start of a recession that will worsen their plights.  A column in the New York Times looks at the potentially coming Trump/GOP recession.  Here are highlights:

The last global economic crisis, for all its complex detail, had one big, simple cause: A huge housing and debt bubble had emerged in both the United States and Europe, and it took the world economy down when it deflated.

[The slump] in 1990-91, was a messier story. It was a smorgasbord recession — a downturn with multiple causes, . . . .The best guess is that the next downturn will similarly involve a mix of troubles, rather than one big thing. And over the past few months we’ve started to see how it could happen. It’s by no means certain that a recession is looming, but some of our fears are beginning to come true.Right now, I see four distinct threats to the world economy. (I may be missing others.)

China: Many people, myself included, have been predicting a Chinese crisis for a long time — but it has kept not happening. China’s economy is deeply unbalanced, with too much investment and too little consumer spending; but time and again the government has been able to steer away from the cliff by ramping up construction and ordering banks to make credit ultra-easy.

But has the day of reckoning finally arrived? Given China’s past resilience, it’s hard to feel confident. Still, recent data on Chinese manufacturing look grim.

And trouble in China would have worldwide repercussions. We tend to think of China only as an export juggernaut, but it’s also a huge buyer of goods, especially commodities like soybeans and oil; U.S. farmers and energy producers will be very unhappy if the Chinese economy stalls.

Europe: For some years Europe’s underlying economic weakness, due to an aging population and Germany’s obsession with running budget surpluses, was masked by recovery from the euro crisis. But the run of good luck seems to be coming to an end, with the uncertainty surrounding Brexit and Italy’s slow-motion crisis undermining confidence; as with China, recent data are ugly.

And like China, Europe is a big player in the world economy, so its stumbles will spill over to everyone, the U.S. very much included.Trade war: Over the past few decades, businesses around the world invested vast sums based on the belief that old-fashioned protectionism was a thing of the past. But Donald Trump hasn’t just imposed high tariffs, he’s demonstrated a willingness to violate the spirit, if not the letter, of existing trade agreements. . . . . For now, corporate leaders reportedly believe that things won’t get out of hand, that the U.S. and China in particular will reach a deal. But this sentiment could turn suddenly if and when business realizes that the hard-liners still seem to be calling the shots.
The shutdown: It’s not just the federal workers not getting paid. It’s also the contractors, who will never get reimbursed for their losses, the food stamp recipients who will be cut off if the stalemate goes on, and more. Conventional estimates of the cost of the shutdown are almost surely too low, because they don’t take account of the disruption a non-functioning government will impose on every aspect of life.

As in the case of a trade war, business leaders reportedly believe that the shutdown will soon be resolved. But what will happen to investment and hiring if and when corporate America concludes that Trump has boxed himself in, and that this could go on for many months?

So there are multiple things going wrong, all of which threaten the economy. How bad will it be?

The good news is that even taking all these negatives together, they don’t come close to the body blow the world economy took from the 2008 financial crisis. The bad news is that it’s not clear what policymakers can or will do to respond when things go wrong.

Monetary policy ­— that is, interest rate cuts by the Federal Reserve and its counterparts abroad — is normally the first line of defense against recession. But the Fed has very limited room to cut, because interest rates are already low, and in Europe, where rates are negative, there’s no room at all.

Fiscal policy — temporary hikes in government spending and aid to vulnerable workers — is the usual backup to monetary easing. But would a president who’s holding federal workers hostage in pursuit of a pointless wall be willing to enact a sensible stimulus?

Finally, dealing effectively with any kind of global slump requires a lot of international cooperation. How plausible is that given who’s currently in charge?

Again, I’m not saying that a global recession is necessarily about to happen. But the risks are clearly rising: The conditions for such a slump are now in place, in a way they weren’t even a few months ago.