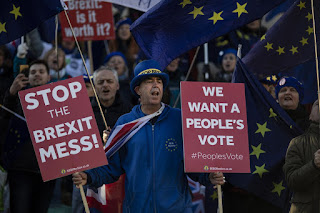 If you want a glimpse of where Donald Trump and his base are taking America, look no farther than the United Kingdom where the Russian manipulated Brexit vote is inching closer and closer to bringing economic ruin to that nation.  The forces that brought this disaster parallel those that placed the utterly unfit Trump in the White House: (i) anti-immigrant animus, and (ii) angry rural whites with delusions of restoring an empire and white privilege lost forever. The parallels between the pro-Brexit voters and Trump's base are truly remarkable.  The irony in both cases is that the economic harms will in many cases harm those who voted based on bigotry and a hatred of modernity itself.  The other parallel is that in both instances, Vladimir Putin is smiling broadly - if not laughing out loud - the self-inflicted harm occurring in the UK and Trump's America,  A piece in at Vanity Fair looks at the impending harm about to befall the UK if the Brexit vote is not quickly reversed.  Here are excerpts:

While Brexit negotiations have stalled, British businesses are heaving with activity—though not of the freewheeling, entrepreneurial variety that Brexiteers once promised. Instead of rejoicing in the cutting of European red tape, top executives now find themselves making preparations for the United Kingdom to crash out of the E.U. with no plan, no customs union, and no way to conduct trade with its single biggest market. “This is a disaster for business,” according to Business Minister Richard Harrington, who is presumably in a position to know.

The crisis isn’t just playing out in Parliament, but in boardrooms across London and Leicester, Luton and Loughborough. Every time Theresa May fields a vote of no confidence, top supermarket brass are strategizing about stockpiling tins of tuna. As Jeremy Corbyn continues to deny voters clarity as to Labour’s stance on the impending divorce, somewhere outside Westminster, a top pharmaceutical honcho is drawing up plans to accumulate medicine. Pets at Home is collecting cat food. Associated British Foods, which produces the beloved Twinings tea, is pre-buying ingredients. One savvy businessman has begun selling emergency “Brexit Boxes,” which contain freeze-dried favorites like chicken tikka, plus a water filter and a fire starter, in the event of a no-deal economic apocalypse.

All these hasty preparations have sparked another problem: Britain, morphing into an oversize warehouse, is running out of storage capacity. According to Harrington, “nearly every square meter” of warehouse space in the country is now full.The drab image of Britain’s warehouses overflowing with life-saving supplies and tin pots of peas is a far cry from the smooth, sparkling vision outlined by Vote Leave leaders. “Britain is a great country. We will be even greater if we take back control of our own democracy,” cheered Brexiteers Michael Gove, Boris Johnson, and Gisela Stuart in an online post just before the 2016 referendum vote. . . . . there won’t be a sudden change that disrupts the economy.”With Brexit scheduled to arrive in nine weeks, and Parliament still divided over May’s withdrawal deal, the British food sector is trying desperately to take back control. Tesco, the largest supermarket chain, has rented an emergency supply of refrigerated units. Marks & Spencer, already in significant financial trouble, is stockpiling nonperishable items. . . . . The government has slapped non-disclosure agreements on multiple companies to keep them from revealing the severity of the crisis.The automobile industry is suffering from a similar problem. . . . . BMW’s supply chain relies on small parts being imported from the E.U. and used at a specific time in the assemblage process. “We are looking for additional [warehouse] space, but in the end, it’s not possible.A key frustration for businesses is that, while they are funneling their resources down a black, Brexit-shaped hole, politicians might suddenly stop fighting, strike up a compromise, and avert a no-deal. . . . Still, it’s understandable why businesses are intent on taking precautions. The government’s contingency planning hasn’t exactly been reassuring . . . .
[O]thers have decided that Brexit Britain isn’t an economically viable option, and have announced plans to set up shop elsewhere. Among those fleeing are Sony (moving its European HQ to Amsterdam); P&O (registering its English Channel ferries in Cyprus); and, perhaps most controversially, Dyson. Rebranding as a “global technology company” rather than a British hoover brand, it is “future-proofing” by heading to Singapore, which, as The Guardian’s Jonathan Freedland points out, recently signed a trade agreement with the E.U.James Dyson, of course, is not only Britain’s wealthiest man, but also an unrepentant Brexiteer who, in 2017, said of a no-deal with Europe, “They’ll come to us.” He must be hoping that the public will accept the official line that Dyson’s move has “nothing to do with Brexit.” Then again, by the time Brexit happens, he’ll be cushioned from accusations of hypocrisy by more than 6,000 miles—and, presumably, a steady income in euros.


This is what Trump - and Putin - want to bring to America.  They must be stopped.
Posted by Michael-in-Norfolk at Friday, January 25, 2019

Oh, Brexit. What a mess. Like here, what damage stupid people in large numbers can do. And just like with Cheeto, Vlad had a hand in it.