Mitch McConnell Is and Has Been the Problem 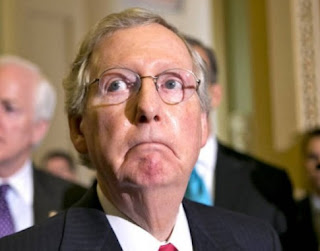 Much of the current mess the United States finds itself in traces back directly to Mitch McConnell.  If you recall, it was McConnell who broke long precedent and refuse to even hold a hearing on Barack Obama's nomination of Merrick Garland to the United States Supreme Court.  It was also McConnell who threatened Obama about letting the American people know about Russian interference in the 2016 presidential election and the Russian effort to hand the victory to Trump. In retrospect, Obama should have ignored McConnell' s threats and perhaps America's current nightmare could have been avoided and perhaps we might have learned early on about Trump and seemingly McConnell efforts to subvert the election with the aid of a hostile foreign power.  Now, as the nation undergoes the longest government shutdown in history and the economic harm spreads across the economy, it is McConnell who continues to block a U.S. Senate vote on reopening the federal government. McConnell clearly puts his political fellatio of Trump ahead of the welling of hundreds of thousands - if not far more - Americans.  A piece in The Week lays blame at McConnell's feet.  Here are excerpts:

The U.S. House has impeached two U.S. presidents in the past — Bill Clinton and Andrew Johnson — and prepared articles of impeachment against another — Richard Nixon. The Senate declined to convict the former two. In Nixon's case, it didn't get the chance before he resigned. The Clinton impeachment was so disastrous that few lawmakers are eager to return to the constitutionally prescribed remedy for egregiously bad or corrupt presidents. But as this partial government shutdown approaches its one-month mark, it seems impeachment isn't such a fringe idea anymore.

In the March issue of The Atlantic, senior editor and former history teacher Yoni Appelbaum makes a surprisingly persuasive argument that Congress has an urgent duty to impeach President Trump . . . . Impeachment is important to pursue even if the Senate fails to remove Trump, Appelbaum says, and Senate Majority Leader Mitch McConnell's (R-Ky.) "Republican majority has shown little will to break with the president."

But doesn't this point to an easier, better remedy to this debacle? Just ditch McConnell.

McConnell isn't doing much of anything to wrest back the institutional power Congress has incrementally shed for 100 years. In fact, as wunderkind Rep. Alexandria Ocasio-Cortez (D-N.Y.) noted on Wednesday, McConnell could almost single-handedly end the shutdown tomorrow if he brought House-passed legislation up for a vote — then, if necessary, up for a possible veto-override.

In late October, Christopher R. Browning, a historian who specializes in Nazi Germany and the Holocaust, noted the similarities between Trump's governance and "the interwar period and the rise of fascism in Europe" in The New York Review of Books.  "Trump seems intent on withdrawing the U.S. from the entire post–World War II structure of interlocking diplomatic, military, and economic agreements and organizations that have preserved peace, stability, and prosperity since 1945," and his "naive and narcissistic confidence in his own powers of personal diplomacy" with the authoritarians he openly admires recalls "the hapless Neville Chamberlain."

But just as Adolf Hitler came to power only with the aide of Weimar German President Paul von Hindenburg, whose conservatives believed "they could ultimately control Hitler while enjoying the benefits of his popular support," Trump isn't working in a vacuum, Browning writes. And "if the U.S. has someone whom historians will look back on as the gravedigger of American democracy, it is Mitch McConnell."

[W]hile impeaching Trump would be terrible for Trump, as Appelbaum details, it would also be a new strain on this hyper-polarized country. On the flip side, a vigorous legislative branch would be salubrious for American democracy. A proud Congress would take this opportunity to reclaim some of its lost prerogative, redefine the relationship between the intended co-equal executive and the legislative branches of government, and check Trump's worst impulses.

There's no mechanism for impeaching a senator, only expelling one, but McConnell is up for re-election in 2020 — and Republicans can replace him as their leader any time they want someone a little bolder and less deferential to Trump. Will they do that? Probably not, unless they become convinced that he's leading them into the political wilderness. But that's still more likely than a two-thirds majority of this Senate convicting Trump of high crimes and misdemeanors.

With luck, McConnell and Trump will be viewed as akin to the Vichy French.  The penalty paid by Pierre Laval might perhaps be appropriate if their treason is proven, although the method used on Laval would afford too much dignity to Trump and McConnell.
Posted by Michael-in-Norfolk at Monday, January 21, 2019