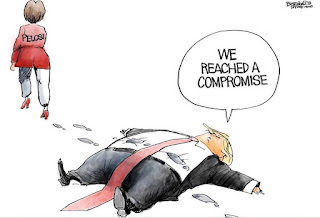 Outwardly Donald Trump has made one blunder after another since January, 2017, but most were not blunders if he is indeed a Russian asset.  Rather, they have all been pieces in the agenda of weakening the USA and the West - e.g., disrupting NATO, trade wars that harm the US economy, and pushing Russian talking points - much to Vladimir Putin's delight.  Some have had the added benefit of thrilling the white supremacists and Christian extremists who now comprise the shrunken base of the  Republican Party.  His game of chicken over his border wall - perhaps he saw it as a monument to himself - and the government shutdown, however, was just plain stupid given the opposition it faced from a strong majority of Americans, 71% of whom viewed the wall as not worth the economic havoc of the shutdown. Perhaps it is no coincidence that Trump's caving happened the same day that air traffic controllers began to cancel flights on the East coast.  A column in the Washington Post looks at the stupidity of Trump's blunder and self-inflicted harm - harm that also extends to the worthless GOP.  Here are excerpts:

There is no way around it: President Trump lost.  He lost his gamble on shutting down the government. And though he will pretend otherwise, he has also lost his grandiose plan to build a border wall that most of the country does not want.

Trump walked away with nothing more than an assurance from congressional Democrats that they will sit down with Republicans for three weeks and try to come up with a border security plan that both parties can agree upon. There’s a reasonable chance they will come up with a solid proposal. But there’s just as much likelihood that Trump’s dream for a wall will die a quiet death there.

Nonetheless, this is the consequence of Trump’s obsession with satisfying the red-hatted, nativist throngs who chanted “build the wall” at so many of his rallies.

Not only do 6 in 10 Americans now disapprove of the job that [Trump] the president is doing, but his party has also lost the 10-point edge it once held over the Democrats on the question of which party to trust on border security, according to a fresh Post-ABC News poll.

House Speaker Nancy Pelosi (D-Calif.) has shown that she better than Trump understands the art of the deal in Washington. She is the one who succeeded in building a wall — and Trump ran right into it.

Now, as Trump surveys the shambles that his greatest blunder has made of his presidency, the question is whether he and the Republicans learned anything from the five-week calamity that they caused. Will his party be as willing to follow him the next time he leads them toward the edge of a cliff?

If there is even a thin silver lining to the travesty of the longest-ever government shutdown, it is this: The Republicans’ slander of public servants has been exposed for what it is. . . . By its final day, there was turmoil at airports, slowdowns at the Internal Revenue Service and countless individual stories of federal workers who were forced to find sustenance at food pantries and face agonizing choices between whether to pay for heat or medicine this month.

Republicans have long portrayed them [government employees] as the enemies of reform and efficiency. But Trump targeted them as no one did before. From his earliest months in office, he and his allies have portrayed those who dedicate their lives to serving their country as the corrupt, subversive “deep state” — the bottom-feeders of a swamp in need of draining.

Where a little empathy might have been in order as the shutdown continued, Trump’s team revealed a callousness that would have made Marie Antoinette blush.

So it was noticeable that when Trump made his Rose Garden announcement Friday that the government was opening again, he began it by thanking federal workers who had displayed “extraordinary devotion in the face of this recent hardship. You are fantastic people. You are incredible patriots.” . . . . Which is why they deserve much better than a chief executive who would wager so recklessly with their lives and their livelihoods.