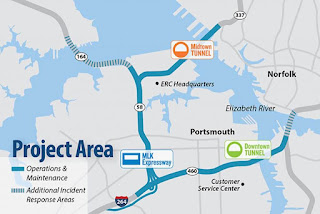 One of the worse fiascoes that former Virginia Governor Bob McDonnell and his Republican cohorts in the Virginia General Assembly have inflicted on Hampton Roads is the "public-private partnership" that granted Elizabeth River Crossings ("ERC") the ability to fleece Hampton Roads commuters with ever increasing tolls in exchange for McDonnell and the Virginia GOP from avoiding tax increases - e.g. an increase in the gasoline tax - to pay for infrastructure that is a governmental responsibility. To call ERC greedy and rapacious is far too kind and their outrageous late fees ultimately forced the state of Virginia to demand reductions in tolls and late fees that quickly totaled in the thousands and thousands of dollars.  Compounding the distress to working class and poor commuters was the DMV's refusal to renew auto registrations until ERC receive its exorbitant demands which subjected commuters to traffic summonses as well. Now, a number of local mayors and members of the Hampton Roads Transportation Planning Board Commonwealth of Virginia are demanding that the economy crushing tolls be lifted.  Such a move will required action by the Virginia General Assembly.  A piece in Channel 13 News looks at this issue and the need to rescind these tolls that screw the public while enriching private interests.  Here are excerpts:

Portsmouth Mayor John Rowe said local leaders must find a way to reverse an agreement between Elizabeth River Crossings and the Commonwealth of Virginia before rising toll prices cripple the region's economy.

Rowe, Norfolk Mayor Kenny Alexander, Hampton Mayor Donnie Tuck and five others have formed a committee to study how the state could possibly change or back out of the agreement with ERC.

The committee was formed at a Hampton Roads Transportation Planning Organization meeting, where the mayors and others voiced concerns about toll prices and other aspects of the agreement. HRTPO director Bob Crum Jr. said he supports the new committee's opinion that something needs to change.

"Those tolls will continue to increase over time, I think the concern is what impact that will have," Crum said. "We need to investigate what options are on the table and work with the state and general assembly to get those things addressed."

Rowe said he feels like local leaders are now recognizing the tolls as a regional issue, and not just a "Portsmouth issue." An Old Dominion University study found Portsmouth lost about $8.8 million each year after the implementation of the tolls in 2015.

However, Crum and Rowe said any changes would likely need to be made in Richmond via the general assembly. The current agreement was made between the Commonwealth of Virginia and ERC. Crum said it was not signed by the local city governments.

Elizabeth River Crossings responded to statements from public officials that the contract needs to end. The company said in a statement that it assumed more than $4 billion in costs when it agreed to expand, renovate and maintain the Midtown Tunnel, Downtown Tunnel and MLK Freeway facilities.
Crum said another section of the agreement between the state and the ERC is worrying for local governments. Due to a non-compete clause, ERC could claim damages and lost revenue when other transportation projects are completed within the region, requiring the state to pay compensation to ERC.

With the High Rise Bridge expansion underway and the Hampton Roads Bridge Tunnel expansion coming soon, Crum said the board is worried about additional costs or repercussions. He said this understanding provides the new committee additional motivation to find a way to end the current agreement between the state and the ERC.

Posted by Michael-in-Norfolk at Wednesday, January 23, 2019