Trump Appointees and Family Show They Are Clueless About Average Americans 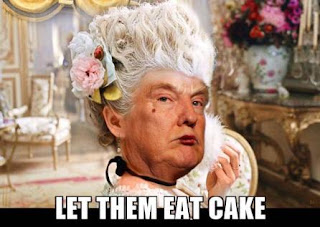 "Let them eat cake" is the traditional translation of the French phrase "Qu'ils mangent de la brioche." While the phrase is commonly attributed to Queen Marie Antoinette, there is no record of her having said it.  Indeed, the first attributions did not arise until the 1840’s and was used by pro-democrat factions against the reign of Louis Phillipe. That said, the derogatory phrase could well apply to Donald Trump who suggested that grocery stores would “work" with unpaid federal.  See how far that gets you at your local Walmart, Kroger, Food Lion or Publix.  And his arrogant out of touch family members and political appointees are no better and have made it clear that they have no clue of real life for the vast majority of Americans.  A column in the Washington Post by former Republican Jennifer Rubin looks at the out of touch batshitery.  Here are excerpts:

The Trump cohort is living up to its reputation as a gang of heartless rich people who don’t care about the pain of others. Commerce Secretary Wilbur Ross declared on Thursday that he couldn’t understand why unpaid federal workers were resorting to food banks. (Because they have no money?) This follows equally clueless and uncaring comments by Lara Trump (“This is so much bigger than any one person. It is a little bit of pain, but it’s going to be for the future of our country”), and economic adviser Kevin Hassett, who explained the shutdown was like having a long vacation. (Minus the money to pay for the vacation. And if you are designated as essential personnel, minus the time off.)

Meanwhile, the shutdown’s effects on critical parts of society — such as air travel — get more and more perilous. . . . A group of former Homeland Security secretaries, including John F. Kelly, warned that the shutdown is threatening public safety and impairing border protection.

Minority Leader Charles E. Schumer (D-N.Y.) went to the Senate floor to excoriate the commerce secretary. “Those comments are appalling, and reveal the administration’s callous indifference towards the federal workers it’s treating as pawns. Secretary Ross’ comments are the 21st-century equivalent of ‘let them eat cake,’” he said. “Many of these federal employees live paycheck to paycheck. Secretary Ross, they can’t just call their stock broker and ask them to sell some of their shares. They need that paycheck.”

Schumer continued . . . We support stronger border security. President Trump believes the best way to do that is an expensive and ineffective wall. We disagree sharply over that — but there’s no reason we can’t negotiate and figure it out.”[Trump’s] package, which included $5.7 billion for a wall, impediments for asylum seekers, and only temporary help for “dreamers,” bombed in the Senate. . . . . The 52-to-44 vote wasn’t enough to reach the 60-vote cloture threshold, but it’s an indication that Trump’s party is sliding away from him.

It would be a bitter pill for the anti-immigrant zealots and for Trump’s pride, but, without caving, the shutdown goes on, inflicting more pain and risking a calamity of some type. The damage to Trump and the GOP may not dissipate after this is over.

In 2020, be prepared to hear a lot about the Republican Party’s cruelty and contempt for the concerns of ordinary Americans. There will be plenty of ammunition, but none more powerful than the GOP’s conduct during the shutdown. Listen, if Republicans can’t keep the lights on and don’t much care about the harm they cause, why should they have the Senate majority and White House?

Mortgage companies, grocery stores and landlords do NOT cavalierly give away products or waive payments.  These horrid individuals who are so clueless should never been in positions of power in governing the country.