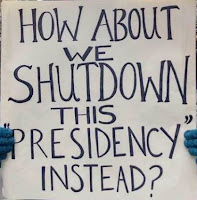 As the federal government shutdown drags on leaving 800,000 employees increasingly desperate financially - I have family members who have been furloughed - and the safety of air travel is being threatened and more and more government contractors feel financial strain, one has to wonder what is in the minds of Congressional Republicans - especially Mitch McConnell - who insist on continuing to give political fellatio to Der Trumpenführer.  A new poll shows that 57% of Americans disapprove of Trump's job performance.  A similar percentage of the population believes that Russia has "kompromat" - i.e., blackmail material - on Trump.  One would think that fear of general election defeat would at some point outweigh fears of a primary challenge.  Here are highlights from Politico on the new poll findings:


Donald Trump's disapproval rating is at an all-time high amid a historically long partial government shutdown and concerns about the president's relationship with Russian President Vladimir Putin, according to a new POLITICO/Morning Consult poll.

Nearly 6-in-10 voters — 57 percent — disapprove of Trump's job performance, compared to the 40 percent that approve. In addition, 54 percent of voters blame Trump and Republicans on Capitol Hill for the government shutdown. Only 35 percent blame congressional Democrats.

“As the government shutdown enters its second month, President Trump continues to carry the bulk of the blame among voters for the stalemate,” said Tyler Sinclair, Morning Consult’s vice president. “In this week’s poll nearly half of voters (49 percent) say the president is responsible — up 6 points since the shutdown began.

When asked whether they will approve of dedicating funds to border security, but not a wall, to end the shutdown, 34 percent supported. Fifty-one percent, however, still opposed that plan.

A majority of voters also believe that Russia has incriminating information against [Trump] the president. According to the poll, 57 percent believe it’s likely that Russia “has compromising information“ on Trump, compared to 31 percent who don't think it's likely.

If there is any good news, it is the reality that Republicans may be setting their Virginia counterparts up for another disastrous election in November 2019.  Trump is already hugely unpopular in Virginia and many suffering as a result of the shutdown may seek their revenge on the Virginia GOP.
Posted by Michael-in-Norfolk at Wednesday, January 23, 2019