A Toxic "Conservatism" on Both Sides of the Atlantic 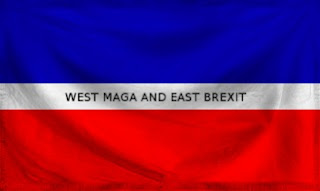 In a post earlier in the week I did a post about the looming economic crisis in the United Kingdom - a crisis brought on by the hate and bigorty of largely rural white voters who hate immigrants and hold delusions of restoring the forever gone British Empire. These are the voters who voted to leave the European Union. The parallels with Trump's supporters is striking: hatred of others, xenophobia and dreams of a lost past are their motivation despite efforts to claim otherwise.  In both nations this toxic outlook is labeled "conservative" although the attributes of these so-called conservatives is anything but classic conservatism.   Webster's defines conservatism as follows: "a political philosophy based on tradition and social stability, stressing established institutions, and preferring gradual development to abrupt change."  The toxic conservatism, if you will of both the UK and the USA seek to destroy everything.  They also share another common denominator: both the Republican Party and the Conservatives (or Tories) in the UK now place party ahead of the national interest.  Their claims of patriotism are false and both parties are for the most part morally bankrupt.  A column in the Washington Post looks at this sad reality,  Here are highlights:

In the capital cities of the two great anglophone powers, public business has ground to a halt. On one side of the Atlantic, federal workers are lining up to receive free food while the president holds the government to ransom. On the other side, the House of Commons, a legislative body that likes to call itself the “mother of parliaments,” is completely frozen by its inability to legislate. The government cannot pass the Brexit deal it has negotiated. The opposition cannot unseat the government.The stiff and uncharismatic British prime minister, Theresa May, might as well be living on a different planet from the vulgar and mendacious President Trump. Yet there is nevertheless something curiously parallel about the two crises: Both are being driven by post-ideological conservative parties, the American Republicans and the British Conservatives, transatlantic cousins who have both lost their way.Their double failure is no mere coincidence. . . . . Pummeled by events — the financial crisis, the wars in Iraq and Syria — both parties have lost that faith. But they have failed to find anything else to replace it. Instead, they have been captured by angry minorities. They are easily manipulated by big funders and special interests. They have stopped thinking about the good of the nation and can focus only on what’s good for the party — or for themselves.Certainly this is true in Britain, where May’s main focus since 2016 has been party management, not British interests. . . . . Had she been willing to reach across the aisle and forge a compact with the Labour Party, she could have ended the stalemate already: There is a majority in the House of Commons for Britain to remain inside a customs union with Europe, a solution that would let trade continue and avoid the need for a hard border with the island of Ireland. . . . . Her party, not the country, is what matters to her most.

At least until now, Republican leaders in Congress have also refused to embrace a pragmatic solution — pass legislation to reopen the government, make a compromise on border security — for exactly the same kinds of reasons. Like May, Senate Majority Leader Mitch McConnell (R-Ky.) has refused to reach across the aisle in order to pay civil servants because he fears a split in his party. Like the British Conservatives, American Republicans answer only to their own voters, not to the population at large. . . . .  Trump’s personal narcissism leaves no room for concern for anyone ­— not government workers, not his party colleagues. His voters seem motivated by tribalism, not ideas, to support him.

[E]ven when the stalemates in Washington and London come to an end, this moment should not be forgotten. The collapse of any motivating ideas on the center-right in the two great anglophone powers will have broader consequences. By losing the ability to think and act in the name of national interest, British Tories and American Republicans have also lost the ability to think internationally.For Europeans accustomed to thinking of Anglo-American politicians as pragmatic and outward-looking, it has come as a shock to learn just how little British Tories actually know about Europe and about trade, just how little Republicans really care about far-flung allies, and just how much conservative politics in both countries has given way to self-dealing and self-interest.I don’t believe that May honestly thinks her Brexit deal is any good, just as I don’t believe that McConnell thinks his tax cut benefited anyone except wealthy friends and donors. These are nihilists who have abandoned one set of values and failed to acquire any others.