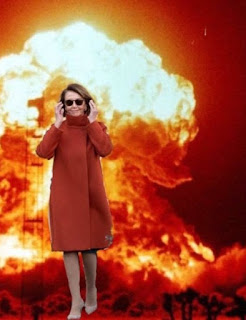 It's a relief to have the government shutdown over for now, especially since I have family members who have been furloughed or forced to work without pay. Beyond that, it is truly delicious to see the shocked reactions of Trump's MAGA hat wearing supporters (wearing a MAGA hat is today's equivalent of donning KKK robes) at his surrender to Nancy Pelosi and the Democrat controlled House of Representatives. Making it even more delicious is the perception of Trump's angry male base is that Trump lost to a woman - a 78 year old grandmother no less. A piece in Politico looks at the shrieks and angst among Trump's racist, anti-immigrant base.  Note how one former aid describes Trump's surrender as watching a house burn down. Here are excerpts:


Before President Donald Trump finished speaking from the Rose Garden, putting a temporary end to the five-week government shutdown, a running group text between several of his former aides lit up with complaints.

“[Speaker Nancy] Pelosi ordered everything off the menu and left Trump hanging with the bill,” one Trump ally texted to the group.

“President Nancy Pelosi, she runs the country now,” said a former White House official. “We went from indefinite shutdown, to down payment, to cave — all within a span of 24 hours.”

That official said that Trump’s core supporters and former aides are “furious” and “melting down.”

[S]ome of his most loyal supporters fretted that Trump was in danger of losing his fervent base that has fueled his presidency. It didn’t help that special counsel Robert Mueller had just released more details about the Trump campaign’s alleged attempts to backchannel with WikiLeaks during the election.

It all left Trump staring at a tough road ahead. Having staked his nascent 2020 reelection messaging to the wall fight, Trump now can’t claim victory as Democrats start entering the field. After stumbling in his first bout with Pelosi, Trump must now face an invigorated Democratic-led House keen to investigate the White House. And following Mueller's reveal of more evidence that Trump’s 2016 team tried to furtively gather intel about hacked Democratic emails, Trump will have to fend off increasing calls for impeachment.

During the month-long shutdown, Trump’s approval ratings dropped to record lows, his much-touted economy lost steam because of the shutdown and conservative immigration activists rolled their eyes over the his wall fixation.

“FAA shutting airports is a losing card,” said a former Trump adviser who remains close to the White House. “He doesn’t care about federal workers. But pissing off travelers — watch out.”

“I’m not sure allies are going along with it, more just letting it happen. It’s like watching a house completely engulfed in flames; there’s nothing you can do except watch,” a former campaign aide told POLITICO when asked about the reaction from hard-line immigration groups like the Federation for American Immigration Reform, whose president Dan Stein appeared to tepidly endorse Trump’s latest strategy.

Three former Trump aides disagreed with Stein’s assessment, claiming [Trump] the president raised a white flag on Friday and surrendered the already-limited leverage he had left. All three expressed dismay at the president’s strategy over the past 72 hours — from him submitting to Pelosi’s request to delay the State of the Union until the government reopened to endorsing a wall-less spending bill while congressional Democrats and Republicans hash things out.

The White House allies said their chief concern going forward is a situation in which Trump backpedals again if a deal isn’t struck in the coming weeks. The White House has left a national emergency declaration on the table, suggesting the president could still invoke executive authority to secure funding for a barrier along the U.S.-Mexico border.Attorneys in the White House counsel’s office have spent weeks reviewing the legality of such a move, parsing the various options, according to one Republican close to the White House.

“He’s going to cave again in [three] weeks,” predicted the former campaign official. “Democrats have Trump by the balls.”

Anything that makes Trump's and his supporters' day hell, warms my heart.
Posted by Michael-in-Norfolk at Saturday, January 26, 2019

Lmaoooo I love the illustration. And the trumpanzees cannot understand why their racism doesn’t translate to the real world.