Republicans Prepare for A Civil War 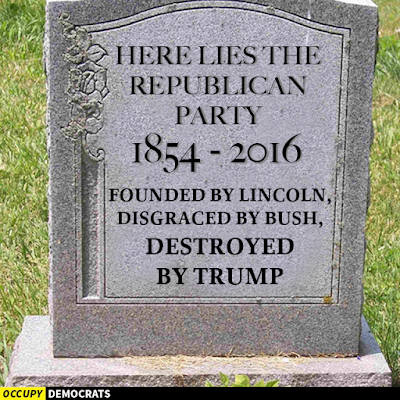 Back in 2000, George W. Bush and the so-called GOP establishment made a concerted effort to court the Christofascists and, less overtly through dog whistle racist slogans, white supremacists.  Locally, that translated into seeing a member of the Christian Coalition elected to a vice-chairman of the Republican Party of the City of Virginia Beach.  At the same time, I and others found that the party that we had known was slipping away.  Religious extremism, especially anti-gay hysteria, and growing overt racism became a near litmus test for party membership.  I left the party and in the years that followed, most of my family did so as well.  Over the years since, the extremism of the party platform has increased with this year seeing the most anti-gay platform ever adopted.  Add in Donald Trump's poisonous racist rhetoric and the situation is now totally toxic.  With Trump hopefully headed to a resounding defeat and the GOP position in Congress threatened, Paul Ryan and other faux moderates are seeing the fruits of years of peddling misogyny.  Some predict a civil war. A piece in the Washington Post looks at the GOP's self-created disaster and the shrinking, and increasingly poorly educated, party base.  Here are highlights:

Anne O’Reilly, a lifelong Republican activist, was in the audience here waiting for Donald Trump to arrive Saturday morning. She remains hopeful that Trump can win the presidency but has no doubt what will happen if he doesn’t.

“I think it’s going to be an eggbeater in the Republican Party,” she said. “I think you’re going to see pieces going all over the place.”

The speech was a laundry list of familiar promises on the economy, national security, immigration and other issues, though the candidate’s message was muddled by his assertions of coming lawsuits against the women accusing him of sexual misconduct and his pledges to break up media companies that he said are trying to deny him the presidency.

It was ironic that Trump chose Gettysburg, the site of one of the most decisive battles of the Civil War, for his speech. Win or lose, Republicans are probably headed toward a civil war of their own, a period of conflict and turmoil and a reckoning of potentially historic significance. . . . . It will only intensify after Nov. 8.

[T]he Republicans face defeat — a potentially sizable one — in the presidential race, along with the possible loss of control of the Senate and the prospect of a smaller majority in the House. Trump’s future is in his hands. Saving the Senate and protecting the House are the priority of GOP leaders.

[A] major problem: The Republican coalition now represents growing shares of the declining parts of the electorate — the inverse of what an aspiring majority party should want.

The major demographic changes are well known. The United States is becoming more diverse racially and ethnically, better educated overall and with a population that is aging. Pew’s analysis found the following: “The Democratic Party is becoming less white, less religious and better-educated at a faster rate than the country as a whole, while aging at a slower rate. Within the GOP, the pattern is the reverse.”

By putting together the demographic shifts with changes in party allegiance, the Pew study underscored two big changes — one talked about for some years, the other an ongoing issue for Republicans that Trump’s candidacy has highlighted. Both bode poorly for the Republicans if they cannot adjust their appeal rapidly.

In 1992, whites accounted for 76 percent of Democrats or Democratic-leaning independents. Today, whites make up 57 percent. Meanwhile, whites made up 93 percent of Republicans a quarter-century ago. Today, they’re still 86 percent. In other words, there’s been a 19-point shift inside the Democratic Party and only a seven-point shift in the GOP coalition.

Trump’s loyalists want a future Republican Party in which the Paul Ryans and others in the current establishment play a reduced role. Those in the party who have openly opposed or resisted Trump want just the opposite.

As I have noted so often, I believe that the GOP is past reform.  The party needs to die and be replaced by a new party that doesn't embrace ignorance and hate and bigotry.