Trump is Now the Face of the GOP 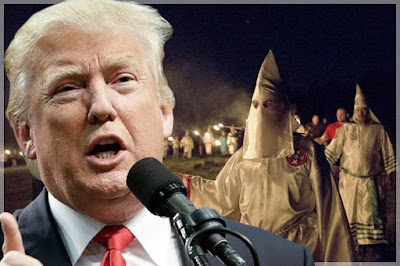 Over the last 20 years, the base of the Republican Party has become uglier and uglier and increasingly misogynistic.  How did it happen?  Yes, some of the hideous elements that we see on proud display were likely always lurking in the shadows of the party base, but they were never embraced by and encouraged by the party leadership.  That began to change as the Christofascists were increasingly voted into positions on local committees and then began to work their way up the party structure.  As the religious extremism increased and the GOP became a defacto sectarian party, sane and rational people fled and became independents or Democrats.  Once this happened, the path was open for other ugly elements to assert themselves, including white supremacists, although many were already in the party given the overlap between the Christofascists and open racists.  The culmination of the trend is Donald Trump's presidential nomination.  Even if Trump loses on November 8th, these ugly elements will still control the GOP.  It is important that this reality not be forgotten.  Republicans who do not want to face this reality are merely deluding themselves.  An op-ed in the New York Times looks at this toxicity and moral bankruptcy that exists across the GOP.  Here are highlights:

The presidential campaign is entering its final weeks, and unless the polls are completely off, Donald Trump has very little chance of winning — only 7 percent, according to the Times’s Upshot model. Meanwhile, the candidate continues to say disgusting things, and analysts are asking whether down-ballot Republicans will finally repudiate their party’s nominee.

The answer should be, who cares? Everyone who endorsed Mr. Trump in the past owns him now; it’s far too late to get a refund. And voters should realize that voting for any Trump endorser is, in effect, a vote for Trumpism, whatever happens at the top of the ticket.

First of all, nobody who was paying attention can honestly claim to have learned anything new about Mr. Trump in the last few weeks. It was obvious from the beginning that he was a “con artist” — so declared Marco Rubio, who has nonetheless endorsed his candidacy. His racism and sexism were apparent from the beginning of his campaign; his vindictiveness and lack of self-discipline were on full display in his tirades against Judge Gonzalo Curiel and Khizr Khan.

[A]ny politicians who try after the election to distance themselves from the Trump phenomenon — or even unendorse in these remaining few days — have already failed the character test. They knew who he was all along, they knew that this was a man who should never, ever hold any kind of responsible position, let alone become president. . . . That’s a huge moral failure, and deserves to be remembered as such.

Of course, we know why the great majority of Republican politicians supported Mr. Trump despite his evident awfulness: They feared retribution from the party’s base if they didn’t. But that’s not an excuse. On the contrary, it’s reason to trust these people even less.

What Republican voters wanted, instead, were candidates who channeled their anger and fear, who demonized nonwhites and played into dark conspiracy theories.

Trumpism is what the party is all about. Maybe they’ll find future standard-bearers with better impulse control and fewer personal skeletons in their closets, but the underlying nastiness is now part of Republican DNA.

And the immediate consequences will be very ugly. Assuming that Hillary Clinton wins, she will face an opposing party that demonizes her and denies her legitimacy no matter how large her margin of victory.

[T]he modern G.O.P. is Mr. Trump’s party, with or without the man himself.