Will Trump Make "Good Christians" Finally Get Off Their Asses? 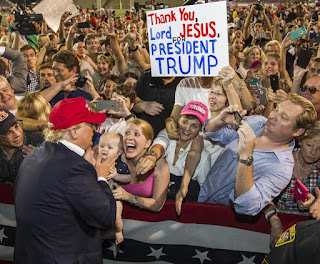 For far too many years the main face of Christianity is that presented by the "Christian Right" and other hate-filled, prosperity gospel modern day Pharisees.  Part of the problem rests with the media which gives a platform to parasitic hate merchants like Tony Perkins of Family Research Counsel, a certified hate group.  Condemnations of the misogyny of the "godly folk" by liberal Christians gets little coverage.  That said, however, too many of the non-haters refuse to loudly speak out and show that there is a less vile and toxic form of Christianity.  This near silence helps fuel the exodus of the under 30 generations which increasingly see Christianity as more harmful than helpful to society - a view I believe is overall very accurate.  A column in the New York Times asks whether Trump may finally be the catalyst to get the "good Christians" off their asses and reclaim Christianity from those who sow hatred and bigotry.  Here are excerpts:

Some conservative evangelicals malign God by suggesting that Christians should scorn adoring same-sex couples yet vote for a sexual predator. They seem to slip seamlessly from “love thy neighbor” to acquiescing in the Gospel of Donald: Thou shalt “grab them” by the genitals.

Yet there’s far more to the story, and liberals haven’t given enough credit to the many conservative Christians who have made the wrenching decision to condemn Donald Trump as the antithesis of the values they honor.

Much of the public focus has been on prominent evangelicals, including Jerry Falwell Jr., Ralph Reed and James Dobson, who are backing Trump. Yet it’s striking how many others denounce him as utterly unacceptable.

The main reason many evangelicals still support Trump, holding their noses, is abortion. But Deborah Fikes, a prominent Texas evangelical, is among those wondering if Christians should broaden their agenda. “Evangelicals are not living out the good news of the gospel as Jesus modeled and commanded when we prioritize criminalizing abortion as our single most important issue politically while neglecting issues of poverty or refugees,” she told me.

More than 20,000 evangelicals have signed a petition on Change.org calling this election “a significant teachable moment for our churches,” adding, “Trump’s racial and religious bigotry and treatment of women is morally unacceptable to us as evangelical Christians.”

It’s easy for secular Americans to dismiss all of this as too little too late — but that would be exactly the wrong approach.

Yes, it has been infuriating to see blowhards who proclaimed themselves “pro-life” when their compassion for human beings seemed to end at birth.

Many young evangelicals seem tired of the culture wars, wearied by politics, and less interested in hounding gay couples than in helping the homeless, the addicted, the incarcerated. Evangelicals have done sterling work fighting prison rape and combating sex trafficking, and if secular bleeding hearts and religious bleeding hearts can just work together, so much more will be accomplished to improve the human condition.

I hope that the crisis among evangelicals this election year creates an opportunity to build bridges across America’s “God Gulf.” As many prominent evangelicals renounce Trump, the secular response should be to applaud that courage in hopes that this is a turning point, and that people of good will, regardless of where they stand on the faith spectrum, can begin to move from fighting one another to tackling the common enemies of humanity that plague us all.