The Right Wing Media Swamp is Killing the GOP 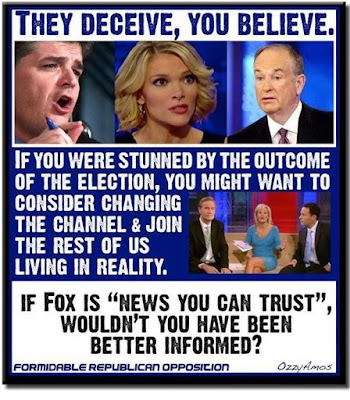 It is not just the base of the Republican Party that is hastening the demise of the party.  Aiding and abetting the ugliness and overall misogyny of the GOP is the right wing media swamp - or perhaps toxic bubble is a better term - that churns out lies and misinformation and helps maintain the fantasy world that so many in the GOP seem to live in.  When one lives in a world where most of the "news" one hears comes from right wing outlets sooner or later (i) you become detached from objective reality, and (ii) have bigoted and ignorant views/beliefs reinforced.  Should Donald Trump lose  - and hopefully, lose badly - on November 8th, any effort to reform the GOP and make it competitive again in presidential elections must address the disservice done by the right wing media that is playing to a shrinking audience even as it pretends to represent the dominant view.  A column in the Washington Post looks at the problem.  Here are highlights:

No doubt, should this expected defeat [of Donald Trump] come to pass, Republican leadership will try to regroup and figure out what went wrong.

As in the last “autopsy,” the GOP establishment will probably conclude that it needs to broaden its appeal to demographics beyond older white men; that what prevented this more widespread appeal in 2016 was having a boorish, sexist, race-baiting, egomaniacal, undisciplined nominee; that if only it fielded a more genteel version of Trump, someone who espoused essentially the same fiscal and social policies but with more empathy, they’d have won the White House, and will win it once again.

This conclusion would be wrong.

The sickness in today’s Republican Party is not confined to its current standard-bearer. It is therefore not curable by merely disavowing, however belatedly, the soon-to-be-defeated nominee. The sickness has taken over the Republican base, and there’s only one antidote.

If Republicans truly want to save the Republican Party, they need to go to war with right-wing media. That is, they need to dismantle the media machine persuading their base to believe completely bonkers, bigoted garbage.

It is, after all, the right-wing radio, TV and Internet fever swamps that have gotten them into this mess, that have led to massive misinformation, disinformation and cynicism among Republican voters. And draining those fever swamps is the only way to get them out of it.

For a sense of just how misinformed Republican voters have become, consider a few of the provably wrong things many believe.

Seven in 10 Republicans either doubt or completely disbelieve that President Obama was born in the United States. Six in 10 think he’s a secret Muslim. Half believe global warming is possibly or definitely a myth concocted by scientists.

Republicans and Trump backers didn’t come to these conclusions independently. They learned them from the influential TV, radio and Web outfits whose imprimaturs Republican politicians desperately seek, and whose more troubling content these politicians have been reluctant to criticize.

When it comes to the paranoid, destructive excesses of right-wing media — not just Fox News’s headliners such as Sean Hannity, but also Breitbart, Rush Limbaugh, Alex Jones — Republican leaders have been somewhat more reluctant to condemn or even gently critique.

That’s presumably because many of the crazy conspiracy theories circulated by these outlets served the party’s political interests. At least in the short term.

Birtherism, which Republican leaders were painfully slow to renounce, helped delegitimize the popular mandate of our first black president, even as it legitimized widespread racial resentment.

Trump is not some black swan, whose unique cocktail of charisma, telegenicism and political fluidity landed him the nomination. His nomination is the product of years of race-baiting, conspiracy-theorizing,expert-delegitimizing right-wing media nonsense, which Republican politicians aided and abetted because it seemed politically expedient at the time. They helped the alt-right create the alternate reality that made a Trump nomination inevitable.

And unless the party establishment grapples with its own complicity in misinforming, misleading and frightening the masses, it’s doomed to field more Donald Trumps in the future.