Trump Supporters View Everything Since the 1950's As Terrible 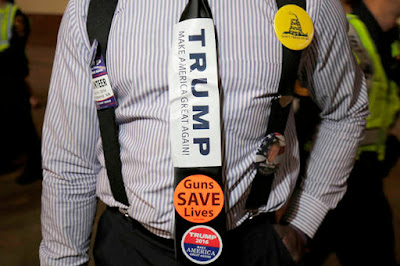 I have often argued that the goal of today's GOP has been to somehow turn the clock back to the 1950's when, according to the party base's view, everything was golden and perfection.  Unless, of course one is black, Hispanic, a woman, LGBT and/or non-religious.  Indeed, everything that has made America a more equal society is viewed as bad by Trumpkins who long for unchallenged white privilege and a time when open bigotry was more acceptable.  A piece in Salon looks new poll findings and at the troubling world view of Trump's base of support.  It is an indictment of what the GOP has become and the ugliness that it has long cultivated.  Now, it has spun out of control.  Here are article excerpts:

If you ever had the sneaking suspicion that “Make America Great Again” was code for “Turn America’s clock back to the 1950s,” a new poll suggests you were absolutely right.

According to a survey published by the Public Religion Research Institute, 72 percent of likely voters supporting Donald Trump say America has changed for the worst since the 1950s. By contrast, 70 percent of likely voters supporting Hillary Clinton say that America has changed for the better since that decade.

The group that most yearns for the 1950s? White evangelical Protestants, 74 percent of whom think things have gotten worse.

Across the board, the study found that Democrats were more likely to care about social justice issues than Republicans. . . . 61 percent of Democrats said race relations mattered to them personally compared to only 31 percent of Republicans.

Finally, 77 percent of Democrats say that America would benefit from more women serving in political leadership roles, a sentiment 62 percent of Republicans disagree with.

The 1950s is a decade closely associated with the Cold War, McCarthy era witch hunts, and violent backlash to the civil rights movement. Although not explicitly incorporated in the themes of Trump’s campaign, the Republican nominee’s critics have long noted that “Make America Great Again” could be viewed as a dog whistle for a return to an era before our society’s major strides in racial and gender equality.

[The] message where ‘I’ll give you America great again’ is if you’re a white Southerner, you know exactly what it means, don’t you?”

Note how southern evangelical Christians lead the way in longing for the bad old days of the 1950's. The remain among the most selfish and self-centered people (and racist) and display a contempt for the Gospel message they claim to support by their opposition to equality and social justice.  They should not be welcome in polite and decent society.
Posted by Michael-in-Norfolk at Wednesday, October 26, 2016