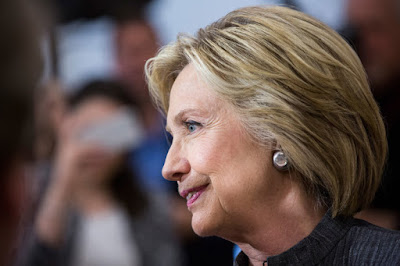 As seems to be the case with major print media outlets in New York City, Donald Trump's home town, The New Yorker has endorsed Hillary Clinton in a lengthy editorial.  As noted before, those most familiar with Trump seemingly cannot stand the man and view him with revulsion.  A sample line from the endorsement: "The vileness of her opponent’s rhetoric and his record has been so widely aired that we can only hope she will be able to use her office and her impressive resolve to battle prejudice wherever it may be found."  Sadly, Trump now represents the true face of the Republican Party base and even if Trump loses, as I pray is the case, the sickness within the GOP will not be eliminated.  Here are endorsement highlights:

On November 8th, barring some astonishment, the people of the United States will, after two hundred and forty years, send a woman to the White House. The election of Hillary Clinton is an event that we will welcome for its immense historical importance, and greet with indescribable relief. It will be especially gratifying to have a woman as commander-in-chief after such a sickeningly sexist and racist campaign, one that exposed so starkly how far our society has to go. The vileness of her opponent’s rhetoric and his record has been so widely aired that we can only hope she will be able to use her office and her impressive resolve to battle prejudice wherever it may be found.

On every issue of consequence, including economic policy, the environment, and foreign affairs, Hillary Clinton is a distinctly capable candidate: experienced, serious, schooled, resilient.

If she is elected, she will have weathered a prolonged battle against a trash-talking, burn-it-to-the-ground demagogue. Unfortunately, the drama is not likely to end soon. The aftereffects of this campaign may befoul our civic life for some time to come.

If the prospect of a female President represents a departure in the history of American politics, the candidacy of Donald J. Trump, the real-estate mogul and Republican nominee, does, too—a chilling one. He is manifestly unqualified and unfit for office.
He favors conspiracy theory and fantasy, deriving his knowledge from the darker recesses of the Internet and “the shows.” He has never held office or otherwise served his country, never acceded to the authority of competing visions and democratic resolutions.

Worse still, he does not accept the authority of constitutional republicanism—its norms, its faiths and practices, its explicit rules and implicit understandings. That much is clear from his statements about targeting press freedoms, infringing on an independent judiciary, banning Muslim immigration, deporting undocumented immigrants without a fair hearing, reviving the practice of torture, and, in the third and final debate, his refusal to say that he will accept the outcome of the election.

The prospect of such a President—erratic, empty, cruel, intolerant, and corrupt—represents a form of national emergency.

At a time of alarming and paralyzing partisanship, this is an issue that reasonable voices in both parties can agree upon. At last count, more than a hundred and sixty Republican leaders had declared their refusal to support Trump. Fifty national-security officials who served in Republican Administrations have done the same. The Cincinnati Enquirer, the Arizona Republic, the Dallas Morning News, and the Columbus Dispatch—all conservative newspapers, which have endorsed only Republicans for between seventy-six and a hundred and twenty-six years—have endorsed Clinton. USA Today, which has never endorsed a candidate, has declared Trump “unfit for the presidency” and has also endorsed Clinton.
The combination of free-form opportunism, heroic self-regard, blithe contempt for expertise, and an airy sense of infallibility has contributed to Trump’s profound estrangement from the truth.  Hillary Clinton’s vision and temperament are the opposite of her opponent’s. She has been a pioneer throughout her life, and yet her career cannot be easily reduced to one transcendent myth: she has been an idealist and a liberal incrementalist, a glass-ceiling-smashing lawyer and a cautious establishmentarian, a wife and mother, a First Lady, a rough-and-tumble political operator, a senator, a Secretary of State. Her story is about walking through flames and emerging changed, warier and more determined. In her intelligence, in her gimlet-eyed recognition of both the limits and the possibilities of government, she’s a particular kind of inspirational figure, a pragmatist and a Democratic moderate. We wish that Clinton faced a worthy opponent: she deserves a less sullied, more substantive win. But her claim to our support goes far beyond the nihilism of the alternative. It is also notable that she has chosen as a running mate Tim Kaine, a highly capable politician with a record of genuine compassion; by contrast, the Republican Vice-Presidential choice, Mike Pence, has tried to position himself for the future on the national stage but has distinguished himself as one of the country’s most fiercely anti-gay politicians, declaring that marriage freedom would lead to “societal collapse.” The most important reason to vote for Clinton may be the matter of the Supreme Court. For two generations, conservative Justices have dominated the Court, and they have imposed their will on several critical areas of the law. Thanks to Citizens United and related cases, the law on campaign finance is in shambles, and wealthy donors now reign over the political process. In 2013, a five-to-four majority gutted the Voting Rights Act, perhaps the most important civil-rights law in American history, and Republican state legislators have taken advantage of this shameful moment in the Court’s history to limit the franchise of those who might vote against them—that is, minorities and Democrats. . . . . Clinton has a chance to lock in these gains, reverse some of the losses, and even augur a new, and very different, era on the Court.
Despite the conspiratorial conjectures of Clinton’s opponents, her politics hide in plain sight. She is a committed progressive on many issues, including the rights of women and minorities; gun laws (she would expand background checks, close gun-show and Internet-sales loopholes, and repeal legislation that immunizes the gun industry from liability litigation); and, more recently, immigration (where she favors comprehensive reform, a pathway to citizenship, and an end to family detention). Clinton not only promises to be a vastly better President than her opponent; she has every chance of building on the successes and insights of a predecessor who will leave office with a remarkable record of progressive change and, in an often ugly time, as an exemplar of Presidential temper and dignity.