Will Trump Be Paul Ryan's Undoing? 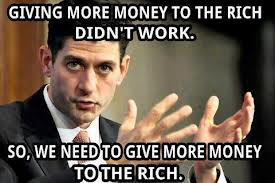 As regular readers know, I loath Paul Ryan and view the man as a phony when it comes to professed religious belief and nowhere near the policy wonk that the mainstream media likes to pretend.  The GOP agenda that Ryan promotes is the antithesis of the Catholic social Gospel that Ryan pretends to respect.  Meanwhile, his budget proposals are little more than a warmed over version of Ronald Reagan's trickle down economics which did not work in the 1980's and will not work now.  Despite these failings in morality and truth and veracity, Ryan is treated as the best thing to come to the GOP in decades.  Fortunately, now, Ryan's waffling self-prostitution to Donald Trump may be the root of his undoing.  The Trumpkins simply are not buying in to Ryan's smoke and mirrors bullshit.  At least that is the premise of a piece in Think Progress.  Here are highlights:

Paul Ryan . . . . was supposed to be the GOP’s conquering hero. He is the architect of the Republican Budget, a general so beloved he persuaded 235 elected lawmakers to fall in line — marching together behind legislation that would phase out Medicare.

Though Ryan was, ostensibly, second fiddle to Mitt Romney, the GOP’s most influential minds spoke of the blue-eyed congressman as the One True King. According to Republican Überlobbyist Grover Norquist, the country needs only to “pick a Republican with enough working digits to handle a pen” because that president’s one job would be signing “legislation that has already been prepared” — Paul Ryan’s legislation.

Ryan was the agenda setter. The mastermind. The man with the plan to unravel the New Deal and nuke the Great Society from orbit.

And then, the GOP’s rank-and-file got other ideas . . . . . According to one recent poll, 58 percent of Republican primary voters view Ryan at least somewhat unfavorably. Though the Speaker has an almost mystic ability to seduce GOP elites and inside-the-beltway reporters with those dreamy blue eyes, he has lost the confidence of his party’s voters.

There are, of course, many factors that contributed to Ryan’s collapse. His gutless response to Trump’s racism and sexism is certainly one of them. . . . . He waited to see which way the wind would blow. And he is now alone, at home neither with the Trump loyalists nor with the Never Trumpers.

Setting aside his failed effort to privatize Social Security, George W. Bush understood that the portion of the Republican base most likely to rally behind a candidate like Trump is also quite pleased with programs like Medicare. It explains why he signed Medicare Part D into law.

[W]hile the last several decades of American politics have largely been a fight between movement conservatism and Rooseveltian liberalism, a different kind of politics — openly racist while simultaneously generous to voters in the in-group — was a major player in U.S. elections for many years. Southern racists ranging from “Pitckfork” Ben Tillman to Jimmy Byrnes to George Wallace promised a mixture of government largesse for white people and oppression for African-Americans.

The spirit of George Wallace lives today in Donald Trump, whose explicit racism is paired with far less enthusiasm for tearing up the American safety net than many of Trump’s fellow Republicans. Paul Ryan, by contrast, hung his career on a proposal to repeal and replace Medicare with a voucher system that provides inferior benefits to seniors at a higher price. This proposal is wildly unpopular. Even self-identified Republicans prefer Medicare to Ryan’s vouchers by a 2 to 1 margin.

Ryan’s full budget package, which also includes cuts to programs like Medicaid and Food Stamps that ethnocentric whites may be more inclined to support that his voucher program, is so unpopular that only a minority of Republican donors support it.

Ryan rallied his party behind a wildly unpopular agenda. He did so at the very moment that the GOP’s white nationalist faction was on the rise. And his signature proposal is especially likely to pique that faction’s legitimate desire to protect its own economic safety net.

The GOP’s alliance between Wallace ethnocentrists and movement conservatives was never inevitable. And now it may be falling apart thanks to Ryan’s miscalculation.