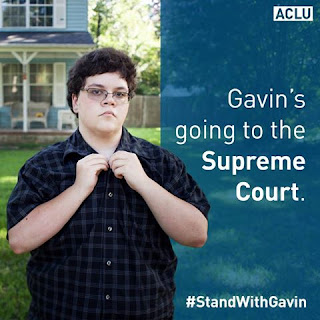 An understaffed U.S. Supreme Court has agreed to take the appeal of the spineless and bigoted Gloucester County School Board from the ruling of the U.S. Court of Appeals for the Fourth that struck down the school board ruling denying gender identity appropriate bathroom use to high school student, Gavin Grimm.  With the evenly split court, the ruling when it comes could be a tie and leave the lower court ruling as the binding law for the states within the 4th Circuit (which include North Carolina) while leaving the law unsettled across the rest of the nation.  One can only hope that a majority of the justices will rule in favor of Grimm and transgender individuals across the nation. It should also be noted that notwithstanding lies disseminated by Christofascist organizations (including the disingenuously named and stridently anti-LGBT Alliance Defending Freedom), there are ZERO instances of inappropriate behavior by transgender individuals in restrooms.  The same cannot be said for Republican  elected officials.  Here are highlights from the Washington Post.


The Supreme Court said Friday that it will decide whether the Obama administration may require public school systems to let transgender students use bathrooms that align with their gender identity, putting the court once again at the center of a divisive social issue.

School districts across the country are split on how to accommodate transgender students amid conflicting guidance from courts, the federal government and, in some cases, state legislatures that have passed laws requiring people to use public restrooms that match the sex on their birth certificates.

The justices accepted a petition from the School Board of Gloucester County, Va., seeking to overturn a lower court’s order that 17-year-old Gavin Grimm, who was born female but identifies as male, be allowed to use the boys’ restroom during his senior year of high school.

It is the most high-profile case the eight-member court has accepted since the death of Justice Antonin Scalia in February. The case will not be heard until next year, and it is unclear whether Scalia’s seat will be filled by then.

In an interview Friday, Grimm said it was unfair that he will continue to be barred from the boys’ bathroom at Gloucester High until the case is decided. He said he tries to avoid going to the bathroom altogether at school but uses the nurse’s bathroom when necessary.

Grimm, referred to as G.G. in court papers, came out as a transgender boy in his freshman year of high school and, as a result of hormone therapy, has a deep voice and facial hair, his lawyers told the court.

“We’re prepared to make our case to the court and to make sure the Supreme Court and people in general see Gavin as who he is and see trans kids across the country for who they are,” said Grimm’s attorney, Joshua Block of the American Civil Liberties Union. Grimm “is not trying to dismantle sex-segregated restrooms. He’s just trying to use them.”

The U.S. Court of Appeals for the 4th Circuit sided with him in April, ruling that his case could move forward. It deferred to the Obama administration’s position that Title IX, the federal law banning sex discrimination in public schools, protects the rights of transgender students to use school bathrooms that align with their gender identity.
A month after the 4th Circuit decision, the U.S. Education Department issued that same guidance to the rest of the nation’s public schools.

The petition said the case provides the court an opportunity to reexamine a 1997 precedent, Auer v. Robbins, that affords deference to an agency’s interpretation of its regulations. It has been criticized by several conservative justices, but the court earlier this year turned down a chance to revisit it and did the same in accepting the Gloucester case.

“This is one of the most important days in the history of the transgender movement,” Shannon Minter, legal director of the National Center for Lesbian Rights, said in a statement. “Whatever the court rules . . . may ensure that transgender people are accepted and included as equal members of our society, or it may relegate them to outsiders for decades to come.”

Remember that the entire issue arose in Gloucester County because of the insistence of a group of rabble rousing Christofascists who seek to inflict their belief system on all citizens.  It their view, only they have rights and everyone else must defer to their beliefs.  They represent, in my view, a toxic cancer on society.
Posted by Michael-in-Norfolk at Saturday, October 29, 2016