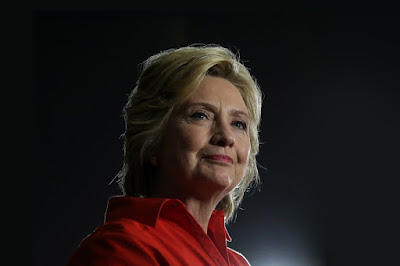 A new ABC poll has more bad news for Donald "Grab them by the pussy" Trump and the Christofascist leaders and white supremacists who are supporting him.  The poll shows Hillary Clinton with a 12 point lead nationally.  Much of Trump's decline stems from self-inflicted wounds, including his attacks on women and statement that he might not accept the election results if he loses. Damage has been especially pronounced, but even a majority of men find Trump's attitude toward women unacceptable.  Here are some of the poll findings:

Hillary Clinton has vaulted to a double-digit advantage in the inaugural ABC News 2016 election tracking poll, boosted by broad disapproval of Donald Trump on two controversial issues: His treatment of women and his reluctance to endorse the election’s legitimacy.
Likely voters by a vast 69-24 percent disapprove of Trump’s response to questions about his treatment of women. After a series of allegations of past sexual misconduct, the poll finds that some women who’d initially given him the benefit of the doubt have since moved away.

Fifty-nine percent of likely voters, moreover, reject Trump’s suggestion that the election is rigged in Clinton’s favor, and more, 65 percent, disapprove of his refusal to say whether he’d accept a Clinton victory as legitimate. Most strongly disapprove, a relatively rare result.

All told, Clinton leads Trump by 12 percentage points among likely voters, 50 to 38 percent, in the national survey, her highest support and his lowest to date in ABC News and ABC News/Washington Post polls.

The results mark a dramatic shift from Clinton’s +4 points in the last ABC/Post poll Oct. 13. That survey was conducted after disclosure of an 11-year-old videotape in which Trump crudely described his sexual advances toward women, but before the events that have followed: A series of women saying he sexually assaulted them, which Trump has denied; his continued refusal to say whether he’d accept the election’s legitimacy; and the final debate, which likely voters by 52-29 percent say Clinton won.

The previous ABC/Post poll found a sharp 12-point decline in enthusiasm for Trump among his supporters, almost exclusively among those who’d preferred a different GOP nominee. Intended participation now has followed: The share of registered Republicans who are likely to vote is down 7 points since mid-October.

Vote preference results among some groups also are striking. Among them:

• Clinton leads Trump by 20 percentage points among women, 55-35 percent. She's gained 12 points (and Trump's lost 16) from mid-October among non-college-educated white women, some of whom initially seemed to rally to Trump after disclosure of the videotape.

• Clinton has doubled her lead to 32 points, 62-30 percent, among college-educated white women, a group that’s particularly critical of his response to questions about his sexual conduct. (Seventy-six percent disapprove, 67 percent strongly.)

• That said, Clinton's also ahead numerically (albeit not significantly) among men, 44-41 percent, a first in ABC News and ABC/Post polling.

[O]ne in three Republicans – 34 percent – disapprove of Trump’s refusal to say whether he’d accept the election’s outcome if Clinton won. That jumps to 65 percent of independents and, again, 91 percent of Democrats. Not only do 65 percent overall disapprove, but 53 percent feel strongly about it.