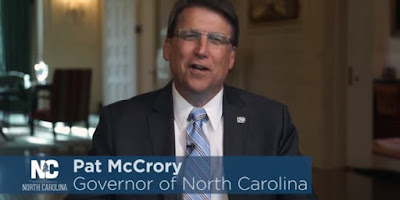 Ever since he rushed to sign infamous HB2 into law, North Carolina governor Pat McCrory has been fighting for his political life and deservedly so.  The heinous law has caused boycotts against his state and triggered the decisions of corporations to forego expansion plans in North Carolina.  Down in the polls for his re-election effort, McCrory has resorted to lying about the state's economy and played the victim of progressive activists.  Now, Donald Trump's efforts to convince voters that the economy is terrible is running directly opposite to McCrory's effort to downplay the economic damage wrought by HB2.  A piece in Politico looks at how Trump is perhaps unwittingly helping in the effort to defeat McCrory next month.  Here are article excerpts:

North Carolina Gov. Pat McCrory is desperate to talk about his economic achievements after a year mired in contentious debate over social issues, including the state’s transgender “bathroom law.”

The only problem? Donald Trump keeps coming to town and telling voters how terrible the economy is.

It’s the most glaring example this year of the disconnect between Trump’s apocalyptic rhetoric and the message of achievement that many Republican incumbents are trying to use to win reelection. . . . . the gap between McCrory’s “Carolina Comeback” theme and Trump’s doom-and-gloom assessments yawns particularly wide, as McCrory faces the toughest reelection challenge of any governor in the country in 2016.

McCrory’s TV ads open with text promising “the truth about North Carolina’s economy” before McCrory touts “one of the fastest-growing economies in the country,” one in which thousands of new jobs are announced “every month.” Yet earlier this month, Trump told attendees at a raucous rally in Greensboro that only under a Trump presidency would their “jobs come back” and “income go up.”

[M]ost Republican operatives said that Trump does McCrory no favors by harping on economic woes without citing the state’s successes, as it could further depress turnout in an already volatile political environment.What Trump would add to McCrory are voters who were already probably going to vote for Trump and McCrory,” said one national operative who works on governors' races. “But the rhetoric isn’t helpful. If voters hear a mixed message, it could keep them at home on Election Day.”

Trump’s negativity on the stump compounds the feeling that the state is on the wrong track, said Carter Wrenn, a local Republican consultant. He pointed to polling that says voters are not personally feeling an economic turnaround in their lives, so Trump’s comments “complicate McCrory’s life,” Wrenn said, because he believes voters “don’t separate North Carolina from the national message.”

[Trump] sucks the oxygen out of McCrory's message. I don’t think voters can hear all the negativity on the national level and believe the state has turned around.”

Cooper’s campaign capitalized on that feeling early, putting out an ad in August that asked voters to “raise your hand if your taxes have gone up, while those at the top are the ones getting the tax break,” flashing images of voters raising their hands. “And raise your hand if you’re working more for less.”

A High Point University poll in late September found that 60 percent of voters said it was more important to end House Bill 2’s economic impact than to enforce the law.

“McCrory’s message just doesn’t ring true with people because he’s got to face all the headlines around HB2, all the job losses from companies leaving and losing sporting events,” said Gary Pearce, a Democratic consultant in the state. “He’s singing the wrong key.”

It is important that McCrory is defeated.  A significant loss may at last convince some Republicans that prostituting themselves to the Christofascists is no longer good for their political survival.  I hope the Virginia GOP is watching how anti-LGBT extremism is having the exact opposite effect of what the North Carolina GOP had thought the bill would achieve for them.