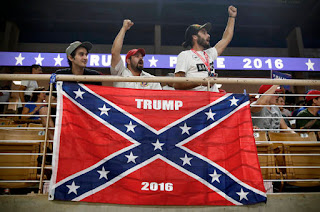 One of the much noted aspects of Donald trump's candidacy is the manner in which it has helped mainstream white nationalists and other elements seeking to restore a white conservative Christian America and bring them out from the fringes of the Republican Party.  Sadly, much of the GOP base seemingly has wildly embraced Trump and his message of racial division and hatred.  Republican apologists try to claim that Trump has not openly courted the support of these elements, but as a long piece in Politico lays out, Trump has consistently sent dog whistle and coded messages to those with white nationalist and KKK ties and ideology.  The messaging - which white nationalists see as being denied with a wink and a nod - has been too consistent to have been inadvertent or by mistake on the part of Trump, his surrogates and his campaign.  As for Republicans who aren't racists (or who claim not to be), it would seem to be time for them to evacuate from the GOP's sinking ship.  Here are highlights from Politico:

The embrace of Donald Trump by America’s white nationalists has been one of the most surprising and unsettling threads in the 2016 campaign. The celebrity New York developer has been endorsed by the nation’s most prominent neo-Nazis, as well as both current and former Klansmen. He is supported online by a legion of racist and anti-Semitic trolls, who push his campaign’s message and viciously attack journalists and politicians they see as hostile to Trump.

Whether deliberately or not, the candidate, his son Donald Jr. and his surrogates have circulated white nationalist messages and imagery online. The Republican National Committee even displayed a white nationalist’s tweet during the GOP convention.

How did the scattered legions of American white supremacists coalesce around a showboating New York mogul? I tracked this two-year evolution through thousands of posts and comments on scores of blogs and forums used by the most ideological racists. What these posts show is the story of a U.S. presidential candidate who slowly but relentlessly overcame widespread distrust and contempt, as white nationalists came to believe he was their candidate—or at least the best candidate they could realistically expect.

Perhaps surprisingly, it wasn’t Trump’s initial campaign announcement about Mexican “rapists” that cemented his support: It was his steady, consistent push for an anti-immigration platform, one of the central policy pillars of the nationalist right. And as white-nationalists began to rally around Trump as its closest political ally in a generation, they began to detect what members called “wink-wink-wink” communications from the candidate. There was his retweet of bogus murder statistics that exaggerated black crime; two separate retweets of a racist Twitter feed called @WhiteGenocideTM; and the interview that sealed the deal: the moment on CNN when—just days before the Louisiana primary—Trump dodged the question of whether to repudiate the endorsement of former Ku Klux Klan leader David Duke, which one commenter on the white nationalist site Stormfront called “the best political thing I have seen in my life.”

Whether the white nationalist community’s embrace of Trump was the result of a conscious strategy on the campaign’s part, some sort of accident or something in between, it led to a show of unified support unprecedented for a modern major-party nominee. Even as Trump supporters argue that the candidate isn’t a racist, when it comes to the white-power movement itself, there’s no question how they see it: More than in any other modern presidential campaign, they believe they’re receiving clear and frequent signals of support.

[T]heir attitudes toward Republican candidates largely have been ambivalent, with many opting out of politics altogether. Now, with Trump, that has changed, raising the prospect that the nominee of a major political party is tapping a deep well of anti-Semitism and racial hate—intentionally or unintentionally—and is mainstreaming such views in the process.

If Trump wins the election, subscribers to those views believe, they will be able to claim increased legitimacy and seek a bigger role in mainstream politics. And even if he loses, as looks more likely, they may be in a better position than ever to claim a stake in future presidential elections—perhaps even to field a candidate of their own four years from now.

Announcing his candidacy at Trump Tower in June 2015, Trump memorably said illegal Mexican immigrants were “bringing drugs. They’re bringing crime. They’re rapists.” With that line, he threw red meat to the white nationalist crowd from the very start of his presidential campaign, but it would take some time for that crowd to believe that Trump was sincere in his rhetoric.

The first white nationalist leader to formally endorse Trump appears to have been Andrew Anglin, an avid online activist who came up through the racist depths of the alt-right, via the 4chan forum, to found a popular neo-Nazi website, the Daily Stormer. In late June 2015, Anglin wrote that he didn’t think Trump could ever beat Hillary Clinton in the general election. But he saw reason for hope in Trump’s rising poll numbers. “I urge all readers of this site to do whatever they can to make Donald Trump President,” Anglin wrote in June.

Trump refused to back down from his controversial remarks about Hispanics, winning plaudits from white nationalists for his defiance of “political correctness” in the face of criticism from business partners and fellow Republicans.

Trump was surging in the polls “because he is not on his knees before Mexico and Mexican immigrants,” said Jared Taylor of the influential white nationalist website American Renaissance, which under the guise of “race realism” attempts to put an intellectual face on white nationalism.

At first, there were only tenuous reasons to think Trump was even aware of the white nationalist debate over his suitability for their cause. In July 2015, Trump had tweeted an image showing a stock photo of Nazi S.S. soldiers where American soldiers should have been. The Trump campaign blamed an intern for the mistake, and the incident faded quickly from the mainstream press. But white nationalist observers saw something different.

[H]is would soon become a pattern: Trump would promulgate messages with racist cues (some more subtle, some less so), then deny or disavow them, while the white nationalist community dutifully perked up and saw those messages as a call to arms.

In November, for example, the candidate retweeted a graphic showing false statistics vastly exaggerating black crime. White nationalists responded enthusiastically, even as they themselves acknowledged the statistics were false. The graphic was later traced back to a white nationalist on Twitter.

Some white nationalists went so far as to goad the candidate into sending racist signals. In late 2015, a social media campaign called The White Genocide Project began directing tweets to the candidate over Twitter. . . . . In late January, Trump took the bait, retweeting a message that had been directed to him from a user with the handle “@WhiteGenocideTM.” While the content of the tweet was relatively innocuous (a light jab at Jeb Bush), the user’s account was filled with anti-Semitic content and linked to a revisionist biography of Adolf Hitler.

Within a few days, Trump retweeted @WhiteGenocideTM a second time, and two more “white genocide”-oriented users soon after that. (The campaign did not respond to media requests for comment on the tweets at the time.)

In February, the hammer finally fell. On his online radio program, recorded the day of Trump’s victory in the Nevada caucuses, Duke credited Trump with energizing white nationalists, and effectively endorsed him, imploring voters in that state to turn out. “You have an absolute obligation to vote for Donald Trump, and to vote against Cruz and Rubio,” Duke said. “If you vote for Ted Cruz, you are acting in a traitorous way to our people. You are betraying our people. Period.” He cautioned that he didn’t agree with everything Trump said, but argued, “Trump is the only chance we really have right now to make a dent, plus Trump is waking up our people and energizing our people across America.”

After Duke’s endorsement, most other white nationalist leaders fell in line.

With a long and persistent series of racial cues, Trump had won the benefit of the doubt from the white nationalist community. In the wake of the CNN interview, a new consensus emerged in that community: Trump was secretly sympathetic to white nationalism, to a greater or lesser degree, and anything he said that contradicted the goals of the movement could be dismissed as an expediency, necessary to get elected. Many white nationalists commenting online thought he actually needed to be more careful about concealing his supposed beliefs in order to advance through the election.

When Trump suggested in August 2016 that Second Amendment supporters might have to redress his potential electoral loss to Clinton, Ryan said it was a “joke gone bad,” while Stormfronters cheered and mocked the “pearl-clutching media.” By the time Trump hired the founder of the alt-right news site Breitbart as his campaign CEO and Donald Trump Jr. tweeted racist memes featuring Skittles and Pepe the Frog in the fall, party leaders could hardly be bothered to keep up. The steady stream of provocations kept white nationalists supportive and stimulated.

Some white nationalists were upset by the recent release of the 2005 “Access Hollywood” tape capturing Trump bragging about sexual assault. But many attributed the leak and subsequent accusations of sexual misconduct to a Jewish conspiracy.

So they were primed when, in a speech in Florida last week, Trump blasted “those who control the levers of power in Washington, and … the global special interests.” He accused Clinton of conspiring with “international banks to plot the destruction of U.S. sovereignty in order to enrich these global financial powers.”

For many Americans, these references might seem merely paranoid. But the hard-won, faithful white nationalist converts to Trumpism had heard and used these terms for decades. And they had a clear idea what their candidate’s words meant.