Quote of the Day: Gavin Grimm - We Are Just People 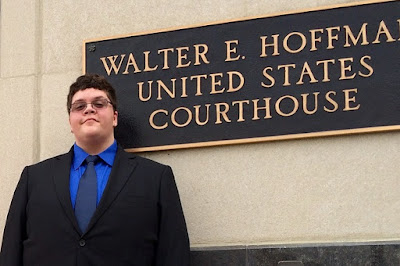 As noted before, the husband and I are lucky enough to know Gavin Grimm and have hosted him in our home.  It is difficult to describe this articulate and thoughtful young man as anything short of amazing.  The same holds for his parents, especially his mother Deirdra, who have stood by their child unlike so many "godly Christians" who have thrown out their LGBT children as if they are inferior and akin to garbage.   It is also telling that Gavin's entire saga and the legal battle that now may be heard before the United States Supreme Court, in my opinion, stems solely from the desire of Christofascists in Gloucester County who seek to punish Gavin  - indeed, anyone who is LGBT - for failing to adhere to their poisonous religious beliefs and ignorant views on gender.  Gavin has a column in the Washington Post that explains his saga, but also notes the thing missed and/or ignored by the self-congratulatory "godly folk" - we are all just people, created by god, nature or whatever deity one believes in, who did not choose who we are. The self-satisfied and falsely pious crowd forget that they had NO role in deciding if they would be born white or black, Christian or Muslim, gay or straight or, like Gavin, transgender.  Here are to me the telling excerpts from Gavin's op-ed:

If you told me two years ago that the Supreme Court was going to have to approve whether I could use the school restroom, I would have thought you were joking.

I was using men’s restrooms in restaurants and shopping malls, so I told the principal I would like to use the boys’ restrooms at school, too. I thought then, perhaps naively, that this common-sense “issue” would be resolved quietly and privately, as it should have been.

If only. Even though I used the restrooms for almost two months without any disturbance, a group of parents and community members heard that “a girl” was using the boys’ restroom and began complaining. Instead of supporting me and the decision of the school administrators, the school board convened two public meetings, inviting the community to discuss my genitals and restroom usage in front of reporters and television cameras.

What keeps me going is the knowledge that I am not the only transgender student out there, and I have the chance to make things better so other transgender kids do not have to go through what I am going through. With each step, my potential for positive impact has increased. First within my school district. Then within the federal courts, where a U.S. District Court ruling in my favor was stayed by the Supreme Court while it considers whether to take my case. And now potentially across the nation, depending on what the Supreme Court justices decide to do.

I did not choose to announce to the news media that I am transgender. My school board made that decision for me. But now that I am visible, I want to use my position to help the country see transgender people like me as real people just living our lives. We are not perverse. We are not broken. We are not sick. We are not freaks. We cannot change who we are. Our gender identities are as innate as anyone else’s.

If the Supreme Court does take up my case, I hope the justices can see me and the rest of the transgender community for who we are — just people — and rule accordingly.

In prior posts, I have identified the two-bit pastor who I believe put the entire issue into motion.  Like many of his ilk, he has no respect for the religious freedom rights of others and seeks to punish anyone who rejects his ignorance and bigotry based beliefs.  What I find so disturbing is that gutless and spineless elected officials continue to give deference to such people and their beliefs.  And as a side note, remember that if one scratches the surface of most of the leading :"family values" groups, you find a white supremacist lurking beneath the surface. These are not nice and decent people.  The sooner society as a whole recognizes this reality, the better off we will be as a nation.
Posted by Michael-in-Norfolk at Friday, October 28, 2016