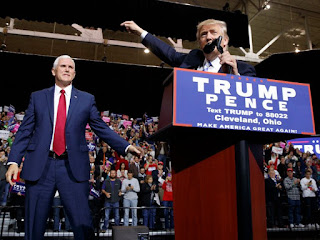 Proving that even the self-loathing gays at the Log Cabin Republicans ("LCR") have limits to the level of self-degradation in which they will participate, the LCR have refused to endorse Donald Trump for president.  The main motivation?  Seemingly Trump's alliance with leading Christofascists who have made a lucrative career denigrating LGBT individuals and striving to block any advancement of LGBT equality under the civil laws.  The Advocate looks at the LRC's refusal to endorse Trump.  Here are excerpts:

After endorsing John McCain in 2008 and Mitt Romney in 2012, the Log Cabin Republicans are declining to endorse the Republicans' 2016 nominee for president, Donald Trump.

The nation's most prominent LGBT Republican organization released a statement on Saturday that acknowledged the conflicting nature of Trump's LGBT positions.

[T}he Log Cabin Republicans have long emphasized that we are not a single-issue organization, nor are our members single-issue voters. Even if we were, rhetoric alone regarding LGBT issues does not equate to doctrine. As Mr. Trump spoke positively about the LGBT community in the United States, he concurrently surrounded himself with senior advisors with a record of opposing LGBT equality, and committed himself to supporting legislation such as the so-called “First Amendment Defense Act” that Log Cabin Republicans opposes."

As Log Cabin pointed out, Trump supports "religious discrimination" legislation that would allow LGBT people to be refused service based on religious grounds. Trump also picked the man associated with Indiana's "turn away the gays" bill, anti-gay governor Mike Pence, as his running mate. Unlike Hillary Clinton, Trump is opposed to marriage equality and has been silent on the so-called Equality Act, which would ban housing and employment discrimination against LGBT people.