The Right Is Giving Up on Democracy 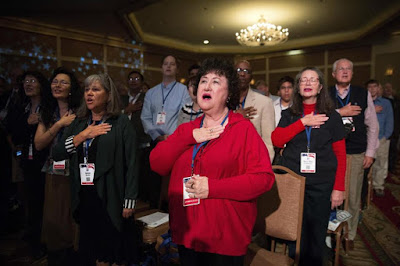 I write often about the ugly elements of the political and religious right here in America who seek to overthrow constitutional government in favor of either a strong man dictatorship or a Christian theocracy.  Sadly, they have historical precedents from the past in other countries.  One that springs immediately to mind is Germany.  Germany in the late 1920's and early 1930's when far too many Germans put a restoration of perceived past national glory and bygone era ahead of democracy and true morality. The consequences for Germany and the world were horrific.   Yet, as The New Republic reports, more and more Republicans and others on the right are seemingly longing to throw away democracy and/or strip others of voting rights.  Some even hold up Vladimir Putin as an exemplary leader.  It is frightening phenomenon and underscores the growing desperation and radicalism of today's American right wing.  Here are highlights:

The single most ominous thing that Donald Trump said in all three presidential debates was a misguided attempt at a quip: “I’ll keep you in suspense, okay?” Moderator Chris Wallace, of course, had posed what would normally be the ultimate softball question for any presidential candidate: Would he accept the results of the election? And even after all his rhetoric about the “rigged” election, even with his increasingly urgent warnings about voter fraud, Trump’s answer came as a jolt. Because it happened in a debate, not during one of his rabble-rousing rallies, it felt like an official declaration that the GOP presidential nominee was prepared to incite a legitimacy crisis rather than accept that he’s lost to a woman.

As always with Trump, the temptation is to interpret this apostasy through the lens of individual psychology. . . . Yet such a personalized account of Trump’s behavior has the effect of letting his political party and his supporters off the hook. Not just for supporting him, but for sharing his grim view of American democracy.

Public-opinion polling shows that Trump’s low opinion of American elections has practically become Republican Party orthodoxy. According to a Reuters/Ipsos poll released on Friday, Republicans have an “unprecedented” level of “concern and mistrust in the system.” Roughly 70 percent of Republican voters believe that if Hillary Clinton wins the election, it’ll be due to fraud.

This suspicious Republican electorate is joined by growing ranks of conservative politicians, pundits, and intellectuals. They’re all increasingly willing to say that the existing American political system is hopelessly flawed and needs to be rolled back to the days before blacks and women could vote. On the most obvious level, this can be seen in moves by Republican governors all over America to make voting more difficult, through stringent voting ID laws, new hurdles to registration, and the curtailment of early-voting options. Equally significant has been the gutting of key provisions of the Voting Rights Act by conservative Supreme Court justices in the 2013 Shelby Country v. Holder ruling.

But these overt forms of voting suppression are merely the most visible manifestations of a larger questioning of democracy on the political right. Trump’s anti-democratic rhetoric—and the eagerness of so many good, white patriotic Americans to cheer it and believe it—is a symptom of the larger trend on the political right toward doubting the legitimacy of the American system.

Suspicion of the democratic system is so pervasive on the right because it’s driven by the fear that white Christian America is facing demographic doom. The evidence is right there in the election results: Republicans have lost the popular vote in five of the last six presidential elections, and if current polling trends hold, the GOP will be batting one for seven when the results come in on November 8. Thanks to gerrymandering, Republicans may hold on to a U.S. House majority for a while, and they’ll remain competitive in state capitols in the near future. But a whites-only party can’t win national elections. And over time, the GOP’s congressional and state fortresses will crumble if the party doesn’t change dramatically. Or if the democratic system doesn’t change dramatically.

[S]ome leading religious conservatives have a different worry: the loss of Christian cultural hegemony. Back in 1999, First Things, a journal of the religious right, hosted a symposium called “The End of Democracy?” that was a precursor of things to come. Prominent Christians and Jews thrashed out the argument that American courts were so relentlessly secular that the entire political system might have to be overthrown. This was radical stuff. As editor Richard John Neuhaus wrote, “The question here explored, in full awareness of its far-reaching consequences, is whether we have reached or are reaching the point where conscientious citizens can no longer give moral assent to the existing regime.”

Over the last few years, it’s become evident that the First Things symposium was no outlier, but rather an early symptom of the religious right starting to think outside the American political system for solutions. More recently, a virtual Vladimir Putin cult has arisen among religious conservatives longing for a return to cultural purity. Putin’s macho bearing, his hostility to LGBT rights, and his fusion of nationalism with support for the Russian Orthodoxy all make him an attractive figure to right-wing Christians disenchanted with Obama’s socially liberal America.

Franklin Graham, heir to the most influential American evangelist, says Putin should be celebrated for taking “a stand to protect his nation’s children from the damaging effects of any gay and lesbian agenda,” even as “America’s own morality has fallen so far on this issue.” Rush Limbaugh cheers Putin for opposing “a full-frontal assault on what has always been considered normalcy.” Religious Right stalward Bryan Fischer, host of the radio program Focal Point, has hailed Putin as a “lion of Christianity.” Sam Rohrer, president of the America Pastors Network, calls the Russian president “the moral leader of the world.”

Beyond this election, beyond even the fate of the Republican Party, there is a significant minority of Americans who are giving up on democracy because it doesn’t serve their purpose of upholding a white Christian patriarchy. Trump is merely a symptom of this problem, and even if he fades as a political force after the election, the underlying disease will remain, and indeed will likely spread. The threat to the American system is not an armed revolt after November 8, but the growing number of Americans who are convinced that only “regime change” can save capitalism, Christianity, and America itself.

On a somewhat related note, the Boston Globe has a good piece on the Christofascists' backing of Trump and the moral bankruptcy and hypocrisy that has been exposed.  The piece is here and deserves a full read.
Posted by Michael-in-Norfolk at Wednesday, October 26, 2016

It is naive to suppose that the right/conservatives were ever enamored with democracy, going back to Burke, Bonald, Maistre. A somewhat more recent example is the attempts to scare black voters away from the polls in Phoenix in the late-40s and early-50s by future Chief Justice William Rehnquist (who perjured himself in confirmation hearings for the high court and then for the chief justice post).

The 2000 Florida election was rigged by massive removal of voters in Democratic-leaning districts by the administration of Jeb Bush, perhaps an inspiration for more recent Republican state governments to make it difficult or impossible for likely opponents to vote.