How a Russian Fascist Is Meddling in America’s Election 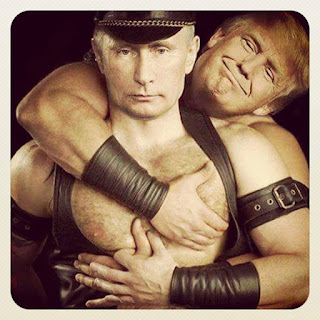 In any number of post now, I have addressed the disturbing apparent efforts of Russian hackers to harm Hillary Clinton and the Democratic Party, Donald trump's dependence on Russian money to keep many of his project afloat, the bizarre bromance between Trump and Vladimir Putin, and the use by both Putin and Trump to employ techniques used by Hitler to come to power.  An op-ed in the New York Times looks at how Putin and Russian Fascist ideas are meddling in America's 2016 election cycle.  Some laugh off the idea, but a closer look should give one pause.  Here are op-ed highlights:

The president of Russia, Vladimir V. Putin, once described the collapse of the Soviet Union as a “geopolitical catastrophe.” But the political thinker who today has the most influence on Mr. Putin’s Russia is not Vladimir Lenin, the founder of the Communist system, but rather Ivan Ilyin, a prophet of Russian fascism.

The brilliant political philosopher has been dead for more than 60 years, but his ideas have found new life in post-Soviet Russia. After 1991, his books were republished with long print runs. President Putin began to cite him in his annual speech to the Federal Assembly, the Russian equivalent of the State of the Union address.

To complete the rehabilitation, Mr. Putin saw to it that Ilyin’s corpse was repatriated from Switzerland, and that his archive was returned from Michigan. The Russian president has been seen laying flowers on Ilyin’s Moscow grave.

Ilyin believed that individuality was evil. For him, the “variety of human beings” demonstrated the failure of God to complete the labor of creation and was therefore essentially satanic. By extension, the middle classes, political parties and civil society were also evil, because they encouraged the development of personalities beyond the single identity of the national community.

According to Ilyin, the purpose of politics is to overcome individuality, and establish a “living totality” of the nation. . . . . he provided the outlines for a constitution of a fascist Holy Russia governed by a “national dictator” who would be “inspired by the spirit of totality.”

This leader would be responsible for all functions of government in a completely centralized state. Elections would be held, with open voting and signed ballots, purely as a ritual of support of the leader. The reckoning of votes was irrelevant: “We must reject blind faith in the number of votes and its political significance.”

In the light of Ilyin’s rehabilitation as Russia’s leading ideologue, Moscow’s manipulations of elections should be seen not so much as a failure to implement democracy but as a subversion of the very concept of democracy.  Neither the parliamentary elections of December 2011 nor the presidential elections of March 2012 produced a majority for Mr. Putin’s party or for Mr. Putin personally. Votes were therefore added to produce a decisive result.

Russians who protested the fixed elections were branded as national enemies. Nongovernmental organizations were forced to register as “foreign agents.”

While Russian leaders consciously work to hollow out the idea of democracy in their own country, they also seek to discredit democracy abroad — including, this year, in the United States. Russia’s interventions in our presidential elections are not only the opportunistic support of a preferred candidate, Donald J. Trump, who backs Russian foreign policy. They are also the logical projection of the new ideology: Democracy is not a means of changing leadership at home, but a means of weakening enemies abroad.

If democracy is merely an invitation to foreign influence, then hacking a foreign political party’s email is the most natural thing in the world. If civil society is nothing but the decadent opening of a rotting society to foreign influence, then constant trolling of media is obviously appropriate. If, as Ilyin wrote, the “arithmetical understanding of politics” is harmful, then digital meddling in foreign elections would be just the thing.

For a decade, Russia has been sponsoring right-wing extremists as “election observers” — most recently, in the farcical referendums in the Crimea and in the Donbas region of Ukraine — in order to discredit both elections and their observation.
Since democracy is a sham, as Ilyin believed, then it is right and good to imitate its language and procedures in order to discredit it. It is noteworthy that the Trump campaign has now imitated this very practice, supplying both its own private “observers” and the advance conclusion about the fraud they will find.

The technique of undermining democracy abroad is to generate doubt where there had been certainty. If democratic procedures start to seem shambolic, then democratic ideas will seem questionable as well. And so America would become more like Russia, which is the general idea. If Mr. Trump wins, Russia wins. But if Mr. Trump loses and people doubt the outcome, Russia also wins.

From Moscow’s point of view, it is easier to bring down democracy everywhere than it is to hold free, fair elections at home. Russia will seem stronger if other states follow its course of development toward a cynicism about democracy that allows authoritarianism to thrive.

What frightens me is that Trump very likely seems himself as the "national dictator" Ilyn envisioned. And then there is his use of Hitler's tactics and demagoguery and scapegoating of minorities.
Posted by Michael-in-Norfolk at Thursday, September 22, 2016