Most Americans See Trump As a Racist Madman 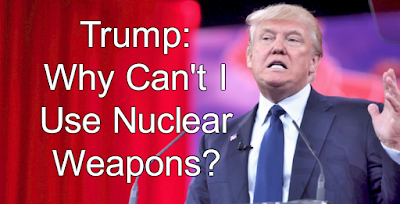 I suspect that core Donald trump supporters who are poorly educated white males would call me an elitist.  Then, of course, I'm a "faggot" in their eyes as well, so I am not doubt doubly suspect in their eyes.  That said, I find myself feeling like some decent, moral Germans did watching Hitler's rise in the early 1930's and wondering what was wrong with their countrymen.  How could they be rallying to a demagogue of questionable sanity?  Inexplicably, in my view, other than through an admission that many Americans are not nice and decent people despite their self-congratulations to the contrary, there seems to be little to explain Donald Trump's continued polling that puts him close to Hillary Clinton, but at least for now still behind.  Making the situation more bizarre are polls that show a majority of Americans see Trump as a racist madman.  A piece in New York Magazine looks at the disturbing phenomenon.  Here are excerpts:

As of this writing, Donald Trump trails Hillary Clinton by three points in the RealClearPolitics average of national polls, while FiveThirtyEight’s election forecast gives the Republican nominee a 40 percent chance of winning the White House this November.

The fact that an emotionally volatile, authoritarian demagogue — who has campaigned on his contempt for minority groups and the norms of liberal democracy — could prove so competitive in a presidential race has led many pundits to accuse the news media of abject failure: Clearly, the fourth estate has not given the American people an accurate assessment of the choices before them.

There’s some sound evidence for this view. The media’s fixation on Hillary Clinton’s use of a private email server has left much of the public ignorant of virtually everything else the Democratic nominee brings to the 2016 race.

Meanwhile, Trump is the most mendacious candidate in modern American history — and yet voters see him as “more honest and straightforward” than his opponent. What’s more, even though his economic program consists of supply-side tax cuts and deregulatory schemes that most Americans oppose — and his career in business has been marked by corruption and incompetence — many polls show a majority of voters saying Trump would be better at handling the economy.

Still, it’s hard to pin full blame for these latter misapprehensions on the media: Trump has been fact-checked with unprecedented aggression — by newspapers, cable news anchors, even chyron writers.

But the Republican nominee boasts many deficiencies that are easy to convey. It’s not hard to show the public that Trump is bigoted, ill-tempered, and unpredictable in his behavior — you just need to broadcast his rallies. And, at that task, cable news has excelled. A pair of new polls show that the message of those rallies has gotten through to the electorate.

An Associated Press–GfK survey released Friday finds that a majority of Americans think Trump is at least somewhat racist, while 60 percent say he does not respect ordinary people, and nearly three-quarters say he is neither civil nor compassionate — a sentiment endorsed by 40 percent of Trump’s own supporters.

A new SurveyMonkey poll shows Americans taking an even darker view of the Republican nominee, with a majority of voters saying Trump would abuse the power of the presidency to punish his political opponents, allow the U.S. to default on its debt, inspire “race riots” in major cities, create a database to track Muslim Americans, and order air strikes against the families of terrorists.

A full 46 percent of the electorate says Trump will detonate a nuclear weapon during his time in office, while 44 percent say he will establish internment camps for illegal immigrants.

The upshot of both of these surveys, when taken together, is that Donald Trump has not been “normalized.” Most Americans see him as a racist would-be authoritarian who is highly likely to start a nuclear war. The trouble is, some voters apparently like that in a president.

According to SurveyMonkey, 48 percent of Trump supporters believe he will create a database for monitoring Muslims; 33 percent think he’ll let the government default on its debt; 32 percent say he’ll use the Executive branch’s authority to persecute political opponents and establish internment camps for the undocumented; and 22 percent — nearly a quarter — say he’ll probably start a nuclear war.

Due to a combination of party polarization, Hillary Clinton’s high unfavorable numbers, unusually popular third-party candidates — and an openness to extremism far more widespread in the electorate than most political observers had realized — it now seems possible that Trump could win the presidency this November, even as more than half the country sees him as a bigoted madman.

Posted by Michael-in-Norfolk at Saturday, September 24, 2016