The Advocate: Hillary Clinton for President 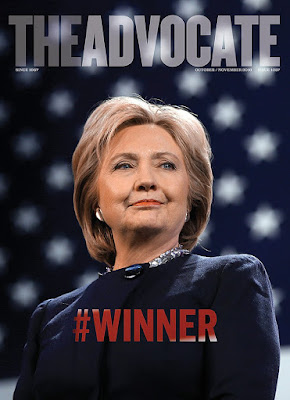 There are some members of the gays community - delusional ones, in my opinion - who try to argue that Donald Trump is the most "pro-gay" of the presidential candidates.  Similarly, I have had Republican friends (perhaps brainwashed by Fox News) try to argue that Hillary Clinton is not really a friend of the LGBT community and that some of my posts have been unduly harsh toward Trump. Having been authoring this blog and following political issues from an LGBT perspective for over nine (9) years and having been a political activist for over two decades, I beg to differ with such criticisms of Clinton and, in my opinion, unsupportable claims favoring Trump.    I do not see myself as a single issue voter - health care reform (I favor a single payer national system), addressing climate change, immigration reform, fixing a dysfunctional economic model are but some of the issues that hold my attention.  But as a member of the LGBT community who has first hand experienced being fired for being gay, harassed by homophobic police, and threatened with physical harm by homophobes, I cannot ignore how important the 2016 presidential election is for LGBT Americans.  The main editorial in the October print issue of The Advocate makes the case for Hillary Clinton wonderfully well.  Here are excerpts:

Elections matter, and this election dramatizes that notion like no other. This is only the second presidential endorsement by The Advocate; the first was for President Obama’s second term. Prior to 2012, there had never been an Oval Office candidate — or incumbent — who fully embraced marriage equality, an essential position to earn this publication’s endorsement.

Clinton has made LGBT inclusion a pillar of her campaign, from the first video announcing her candidacy. She has produced the most complete and impressive LGBT platform of any presidential candidate ever. In it, she has vowed to champion the Equality Act, the legislation that would enact federal nondiscrimination protections with regard to sexual orientation and gender identity. Clinton’s policy platform called for an end to the ban on transgender military service — now officially gone — an end to quack “conversion therapy” for minors, an end to discrimination against LGBT families in adoptions, improved school conditions for LGBT students, expanded shelters for homeless LGBT youth, affordable treatment for people with HIV, expanded access to PrEP, expanded data collection and other measures to stem the disproportionate violence against trans people, and improved access to correct identification for trans people, along with many other positions that directly affect the rights, health, and welfare of our communities.

Clinton has raised these issues with consistency during the primary season, and they have become a hallmark of her campaign heading into the general election.

Clinton’s opponent, real estate investor and reality-show host Donald Trump, has no voting record and an arm’s-length relationship with the truth, making his policy positions hard to pin down. But the Republican nominee has indicated his eagerness to abandon civil rights in pursuit of an electoral win. His selection of Indiana governor Mike Pence (a sop to the conservative base), who rose to national prominence by signing a disastrously discriminatory anti-LGBT bill into law, underscores Trump’s abject refutation of LGBT rights as a principle he considers with any seriousness.

Trump’s own statements make him an unsuitable choice for the presidency. The stakes are far too high for LGBT Americans, when so much progress for our rights has been advanced under Obama’s leadership. . . . . He has vowed that if elected president, he would rescind Obama’s executive orders that protect trans people from discrimination in health care coverage and in public schools, and the executive order that bans discrimination against LGBT employees of federal contractors (which comprise an estimated 20 percent of the American workforce). He has endorsed the unconstitutional First Amendment Defense Act, a nationalized version of a RFRA, and has said he’s interested in appointing Supreme Court justices who would overturn the Obergefell marriage equality ruling. He’d leave marriage equality, access to insurance, employment nondiscrimination, and the option to deny people the use of school and public bathrooms to the states.

Clinton is a calm, deliberative leader with decades of public service experience and an impressive command of policy, detail, and the concerns of overlapping minority communities. Whereas Trump alienates women, Muslims, immigrants, and LGBT people, Clinton’s record as a U.S. senator is marked by bipartisanship, and her campaign is marked by inclusivity.

To imagine that the election result is a foregone conclusion — that Clinton will handily and easily defeat Trump in November without serious effort on the part of an engaged electorate — is a mistake. The U.K.’s Brexit vote is an example of left-leaning activists and voters wrongly assuming that voters will exercise “common sense.”

There is no foregone conclusion. There is no obvious outcome. But there is only one capable candidate in this election, and only one candidate who is a champion of LGBT causes. That clear and necessary choice is Hillary Clinton.

Posted by Michael-in-Norfolk at Thursday, September 22, 2016