Will Trump's Purported Rise in the Polls Boost Hillary's Turnout? 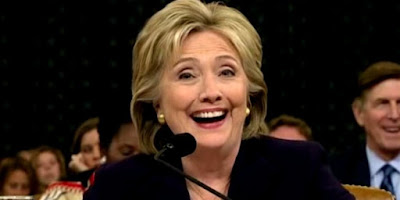 While I continue to be dumbfounded as to how anyone sane, decent, and moral can be a Donald trump supporter, some polls suggest he is rising in the polls - thanks in part by a media that continues to engage in false equivalency and that allows itself to be played by Trump's antics.  That said, some conjecture that Trump's rise in the polls may be a boon to Hillary Clinton as it motivates those who detest and/or are terrified at the prospect of a Trump presidency to redouble their efforts and make sure that they get themselves to the polls on November 8, 2016.  Based on the social media activities of two of my children, both so-called Millennials, they are pulling out the stops when it comes to urging friends to support Hillary Clinton and ditch all thoughts of voting for a third party candidate as a futile act of protest.  A piece in Politico makes the case that perhaps Hillary Clinton's by some accounts lackluster September will benefit her in November.  It also looks at the stupidity of voting for a third party candidate.  Here are excerpts:

You can choose one or more of the explanations for what has happened to Hillary Clinton in recent weeks as Donald Trump has closed in on her in the polls.

But what is especially bedeviling the Clinton campaign is that, at least until now, constituencies most critical to her campaign seem to have no sense of urgency about keeping the Donald Trump out of the White House. While Hispanics, who backed Obama in 2012 by a more than 2-1 margin, support Clinton by a similar margin, they seem far less inclined to vote than they did four years ago.

That is what could change now that Trump threatens to actually take the White House.

Younger voters, who not only backed Obama by landslide margins but turned out in record percentages in 2012, have until now expressed relative indifference to the campaign or have turned to the alternatives: Libertarian Party nominee Gary Johnson and the Green Party’s Jill Stein.

And remember: without massive support and a heavy turnout among younger voters, Obama’s margins in Florida and other key states would have been wiped out.

Yes, support for minor party candidates tend to fall when the leaves do; yes, the Clinton campaign has a get-out-the-vote machine whose reputation—yet untested—is formidable.

But what may be their most powerful weapon is the clear possibility that Trump could win, which is why Clinton’s very bad few weeks could, in the end, be very good for her. Trump’s climbing numbers could finally motivate her complacent Democratic base and other voters who have never been crazy about her and not especially motivated to come out to the polls, especially if she were running away with the race.

Clinton campaign’s most plausible argument to its wavering voters: Get real, folks.
“You’re looking at Johnson and Stein as a way of rejecting a corrupt, unresponsive two-party system,”  . . . . But please be willing to consider that you might be mistaken. Look back 16 years, and see what a similar vote—for Ralph Nader—did. His 94,000 voters in Florida would have wound up giving Gore a net of about 20,000 votes—more than enough to make butterfly ballots and hanging chads irrelevant. Now, between launching the Iraq War and the two Supreme Court justices Bush appointed, did it really make no difference?”

If you vote as a Libertarian for Johnson, you will materially increase the chances of a Trump presidency. Look at the list of potential judges. On everything from gay rights to abortion to his own views of the First Amendment, Trump is on record as rejecting core libertarian principles. If you vote for Jill Stein as a progressive, you are helping to put in power a president whose tax plan makes the rich richer, who thinks climate chance is a hoax, who wants to abolish whole swaths of environmental protection laws. So voting for Johnson or Stein means you’re voting for a label—a ’libertarian,’ or a ‘progressive’—without realizing that the consequence of that vote could lead to a president who rejects everything you claim to hold dear.”

Of course, it’s possible that Trump’s own character and temperament, revealed on the debate stage or in his bizarre-world campaign appearances, will convince voters that in the end , he is a risk they are not prepared to take.But for voters unsure about Clinton, relying on Trump to self-destruct after what he has survived is a risk they cannot take. So, even though the Scottish Presbyterians rejected Cromwell’s plea, and even though the officials at Wimbledon did not change their call, their pleas still suggest that Trump’s rise in the polls could be a powerful argument for Clinton.

Posted by Michael-in-Norfolk at Wednesday, September 21, 2016