The GOP Died This Weekend; A Preview of A Trump Presidency 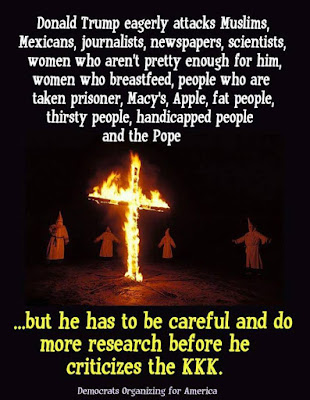 Try as I might, it is impossible to not write about the never ending lies and misogyny of Donald Trump and a political party, the GOP, which has demonstrated that morality and common decency no longer matter.  I remain utterly convinced that Trump is a threat to America and its constitutional form of government.  The man is a demagogue of the worse order and utterly unscrupulous as the countless contractors and/or victims of Trump university can painfully recount.  Even more frightening is the abuse of power that can likely be expected should Americans commit collective political suicide and put Trump in the White House.  Two op-eds in the Washington Post look at both the GOP's suicide and then another outlines what we might expect under a Trump presidency.  Here are highlights from the first by a conservative columnist that looks at the death of morality in the GOP:

Those Republicans mortified by the presidential nomination of Donald Trump have been pondering a series of questions over the past few months: The answers have become clear over the past few days. Trump’s campaign put out an egregiously false statement on Thursday claiming Trump “ended” the birther controversy in 2011 and blaming Hillary Clinton for starting the racist smear. Trump, without explanation or apology, on Friday announced the president was in fact born in the United States. A series of surrogates, including Kellyanne Conway, Gov. Chris Christie and vice presidential nominee Mike Pence, fanned out on Sunday to double down on the lies, reiterating this was all Clinton’s fault and insisting, despite Trump’s multiple utterances since 2011, that he had not fanned the racist fires and built his political image on birtherism.

It is noteworthy that NBC’s Chuck Todd, CBS’s John Dickerson, CNN’s Jake Tapper and ABC’s Martha Raddatz all grilled — and in some cases decimated — the Trump surrogates, demonstrating that responsible journalists do not abandon the topic when Trumpkins try to deflect but press and press again for answers.  They remind us this must be front and center at the debates, and moderators should not move on until Trump answers their queries.

Also. let’s not forget that in a second stream of deplorable rhetoric Trump has also suggested violence might come Clinton’s way. This weekend he declared that her security detachment should disarm and we will “see what happens.”

To top it off, Republican National Committee chairman Reince Priebus , who has carried Trump’s water and defended his egregious remarks, on Sunday threatened “penalties” would be enacted on the Republican nominees (e.g., Ohio Gov. John Kasich) who refused to endorse the racist, misogynistic, xenophobic, pathological liar.

No matter what Hillary Clinton’s faults — and they are many — it is hard to seriously argue that a man who would lead a racist conspiracy  theory and then try to blame his opponent is fit to be president. Trump, like a small child caught misbehaving, simply denies the evidence or blames someone else or lashes out in anger.

As for the fate of the GOP, the evidence mounts that it cannot go merrily on its way after the election. A party that would sanction people who call out a racist deserves to go out of business. A party whose congressional leaders remain supportive of a nominee who incites violence, perpetuates racism, blatantly, and traffics in conspiracy theories loses the moral authority to govern.

All very well said.  As noted, yet another column cautions what could happen under a Trump presidency where lies and conspiracy theories would likely flourish and the nation could well face a constitutional crisis unlike any other to ever confront it.  Here are excerpts from this piece:

It’s important to acknowledge when you’ve been wrong, and I’ve probably never been so wrong as I was in an op-ed published on April 13, 2010. At the time, I was stunned by a terrible tragedy: the crash of a plane that had carried the Polish president, Lech Kaczynski. He had been flying to the Russian city of Smolensk to visit the memorial at Katyn, where Stalin murdered 20,000 Polish officers in 1940. Several dozen senior military figures and politicians were also on the plane, many of them friends of mine and colleagues of my husband, who was then the Polish foreign minister.

In the sweep of emotion that followed the crash, comparing the event to Katyn, I wrote this sentence: “This time around, nobody suspects a conspiracy.” As an excuse, I offer the fact that the tragedy initially seemed to bring people together.

But my optimism was premature. The president’s brother, Jaroslaw Kaczynski,  . . . . like Donald Trump, he saw that a conspiracy theory could help bring him to power.

Much as Trump used birtherism to inspire his core voters, Kaczynski, in the years that followed, used the Smolensk crash to motivate his supporters, that minority of the Polish population that remains convinced that unnamed secret forces control the country, that the “elite” is manipulated by foreigners and that everything that has happened in the country since 1989 is part of a sinister plot. And it worked.

But there is just no evidence of one at Smolensk. Within hours of the crash, Polish forensic experts were on the ground. They immediately obtained the black boxes and transcribed them meticulously. The cockpit tape can be heard online, and it makes the circumstances painfully clear. The president was late; he had planned a live broadcast from Katyn. When Russian air traffic controllers wanted to divert the plane because of heavy fog, he did not agree. . . . . “Be bold, you’ll make it,” he told them. According to the official report, written by the country’s top aviation experts, the plane hit a tree, then the ground, and then broke up.

In the wake of Trump’s grudging renouncement of birtherism, the insidious, racist theory that gave rise to his political career, it’s worth pondering what happened when Law and Justice came to power. Within days of taking office, the new government removed the official report from its website. (It’s still available online.) More recently, police and prosecutors entered the homes of the aviation experts who testified in the original investigation, interrogated them and confiscated their computers.

A new (and well-paid) government commission was formed, containing a group of cranks and “experts” — including an ethnomusicologist, a retired pilot, a psychologist and other people with no knowledge of air crashes. . . . . None of these theories has ever been accompanied by the slightest hint of genuine evidence. . . . As in communist Poland, a fictionalized version of history, one that suits those in power, could eventually be on the curriculum.

One of the first things Law and Justice officials did upon taking power was launch an open attack on Poland’s constitutional court, and to re-politicize the independent prosecutor’s office. At the same time, they have put all of the country’s secret services in the hands of a man who has been convicted of fabricating documents, and whom they then pardoned. They might have had many motives for making these changes. But if nothing else, they could use these tools to “prove” one of the ludicrous theories using faked evidence at public show trials, another communist innovation.

Trump, like Kaczynski, pushed a patently false conspiracy theory hard for many years, despite the utter lack of evidence. Last week, he found it expedient to discard that theory, but once he is president, he might find it expedient to adopt it again — or perhaps to push one of the many others he has championed. As president, he can then use the state — the Justice Department, the security bureaucracy, the FBI — to pursue them. A Trump administration could make birtherism the excuse for fake investigations, hearings and even trials that would do terrible and irreversible damage to U.S. politics and the rule of law.

It all sounds unthinkable, of course. But if you’d asked me five years ago, or even one year ago, I would have told you that the transformation of the Smolensk conspiracy theory into state ideology was unthinkable, too. And yet it has come to pass.

Far fetched?  Perhaps, but a year and a half ago, Trump running for the presidency was a laughing matter.  Yet, through calls to hate and bigotry and conspiracy theories he rode the ugly elements of the GOP base to win the GOP nomination.  I for one believe it is too dangerous to risk seeing what the man could do with the powers of the FBI, Justice Department and other agencies to harass or prosecute opponents.  The man is amoral and a narcissist of the first order.  He is DANGEROUS and must be defeated.
Posted by Michael-in-Norfolk at Monday, September 19, 2016