The Progressive Case for Hillary Clinton 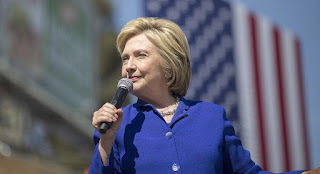 As noted in a prior post, a number of Millennials and progressives who supported Bernie Sanders continue to have their panties in a wad and are making noises about voting for a third party candidate or staying home on election day.  Personally, as a long time political activist, I view such behavior as self-defeating.  All such conduct will do is put Donald Trump in the White House and help usher in policies that are diametrically opposed to Sanders' agenda.  More maddening is the reality that it ignores the fact that Hillary Clinton is running on one of the most progressive platforms in history.  A piece in Mother Jones lays out why Millennials and other disgruntled progressives need to smell the coffee and support Clinton on election day.  Here are excerpts:

For a lot of liberals, the most important goal of this election is to keep Donald Trump out of the White House. And since Trump naturally sucks up most of the political oxygen, that means lots of blogging about Trump and not so much about Clinton.

But a lot of lefties aren't happy about that. They want a positive argument in favor of voting for Clinton, not just a negative one for voting against Trump. That's fair enough, so I figured I'd put one together.

But I should be crystal clear here: Nobody should take this as an attempt to demonstrate that Clinton is perfect or to persuade you to vote for her. If you think she's too instinctively hawkish—as I do—that might be reason enough for a liberal to vote for someone else. On some issues—supporting the Iraq War, supporting the Trans-Pacific Partnership, voting for the Patriot Act, etc.—she's taken positions that might be flat deal killers. On other issues, you might think she's not strong enough, or that it took her too long to get to the right place. Finally, on a personal level, she's often oversecretive, overly lawyerly, and sometimes skates a little close to some ethical lines. She distrusts the press and withholds information too often. And she is, plainly, an establishment politician, with all the flaws that implies.

On the other hand, no successful politician is ever perfect. Franklin D. Roosevelt signed on to lots of compromises that liberals detested. Ronald Reagan did the same with conservatives. Clinton will too. There are just too many competing interests in a pluralistic country like America to expect anything else. But all that said, the liberal case for Clinton remains pretty overwhelming.

Now consider what a president Trump would do on these issues.  When viewed in such a light, I do not know how a pragmatic progressive can do anything but vote Clinton-Kaine on November 8, 2016.
Posted by Michael-in-Norfolk at Monday, September 19, 2016