Robert Gates: Trump is "Beyond Repair" 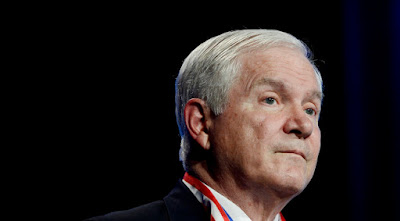 Yet another prominent Republican, while not endorsing Hillary Clinton, has declared Donald Trump utterly unfit for the office of the presidency and in response to those in the GOP who are trying to tell themselves that Trump can be controlled or moderated, described Trump as "beyond repair."  This time the Republican is former Defense Secretary Robert Gates.  His take down of Trump is scathing even as it has cautionary words for Hillary Clinton.  A piece in Talking Points Memo looks at this latest condemnation of Trump.  Here are excerpts:

Gates, who served under former President George W. Bush and President Barack Obama, knocked Trump for everything from his attitude to his thoughts on foreign policy. He characterized him as someone who is “willfully ignorant about the rest of the world, about our military and its capabilities, and about government itself.”

“He has no clue about the difference between negotiating a business deal and negotiating with sovereign nations,” Gates wrote. “A thin-skinned, temperamental, shoot-from-the-hip and lip, uninformed commander-in-chief is too great a risk for America.”

Gates urges Clinton to give voters more reason to trust her and to focus on her national security policies in speeches.

'"Mrs. Clinton has time before the election to address forthrightly her trustworthiness, to reassure people about her judgment, to demonstrate her willingness to stake out one or more positions on national security at odds with her party’s conventional wisdom, and to speak beyond generalities about how she would deal with China, Russia, North Korea, Iran, the Middle East — and international trade. Whether and how she addresses these issues will, I believe, affect how many people vote — including me,” Gates wrote.

For Trump, Gates had this to say: “He is unqualified and unfit to be commander-in-chief.”

While Clinton has not publicly addressed Gates’ op-ed, Trump took to his favorite medium, Twitter to blast Gates, saying that he has never met him, but that he does not like his work.

Indeed, Trump doesn't "like the work" of anyone who doesn't fawningly kiss his extremely ample ass.

Posted by Michael-in-Norfolk at Sunday, September 18, 2016