Only "Cafeteria Catholics" Can Survive in American Politics 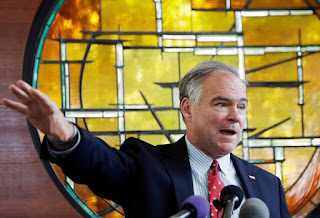 A number of surveys have demonstrated that rank and file American Catholics disagree with the official position of the Vatican on a host of issues ranging from positions on abortion and contraception to same-sex marriage.   In common parlance, such non-conforming Catholics are called "cafeteria Catholics."  Even my late mother, a lifelong Catholic, fell into this category, especially when she said she just ignored the official Vatican position, perhaps most notably on the issue of gays and same-sex relationships.  Now, America finds itself with a Roman Catholic vice presidential candidate and one who was raised Catholic and left the Church for right wing Protestantism.  These candidates take starkly different positions on a host of issues and who also vary from official Church positions on a number of issues. For the record, I support Democrat Tim Kaine's approach to the Vatican dictates as opposed to Republican Mike Pence whose support for the GOP's reverse Robin Hood policies, denial of Climate Change, and throw the poor in the gutter mentality flies in the face of both the Gospel message and the Vatican's approach to the social gospel.  A piece in The Atlantic looks at the dichotomy and why only cafeteria Catholics seem to be viable in American politics.  Here are article highlights:

There are lots of ways to be a Catholic public leader in the United States. But the only path that’s impossible, it seems, is to advocate policies that fully follow the Church’s teachings on Jesus. Politicians of both parties have to pick and choose their theology, sticking to party lines that defy the United States Conference on Catholic Bishops’ guide to faithful citizenship. For their part, lay Catholics have largely blended into the general electorate. Far from taking positions that are distinctive to their faith, many hold views that reflect their partisan allegiances.

This is a relatively new dilemma for American Catholicism. Half a century ago, when John F. Kennedy ran for president of the United States, his fellow citizens feared he might prove more loyal to the bishop of Rome than the American people.

Today, it would seem ridiculous to accuse someone like Tim Kaine, who is Catholic and a nominee for vice president, or his rival Mike Pence, who was also brought up Catholic, of trying to give Pope Francis unseemly power over the White House. . . . . But while non-Catholic Americans are much more comfortable with the Church than they used to be, their changing attitudes say less about acceptance than assimilation. The price of Catholics’ admission into public life was a loss of distinctiveness. And the political records of this year’s two vice-presidential candidates—both of whom have openly defied the Church on different issues—illustrate why.

Tim Kaine has touted his Catholic identity on the presidential campaign trail, dropping Bible-verse burns and references to his Jesuit education. On Friday, he spoke in a conference call to a group of Catholic leaders around the country, talking up his faith background and Hillary Clinton’s commitment to empowering families and kids.

At times, though, he has directly challenged the Church’s positions, particularly on social issues. At a September dinner hosted by Human Rights Campaign, the LGBT-rights advocacy group, he said the Church will eventually come to accept same-sex marriage, just as he has . . . .

On other issues, Kaine has been more conflicted than defiant. During his time as governor, he presided over 11 prisoner executions, despite the Church’s strong opposition to the death penalty. In an interview with C-SPAN this summer, Kaine said the decision to approve the killings was “the hardest thing I had to do … It’s still painful to talk about.” He’s also shifted positions on abortion. . . . For these reasons, Catholic leaders have publicly questioned Kaine’s Catholicism, marking a radical change in how Catholics’ public lives are evaluated.

This isn’t just a challenge for Democrats. Mike Pence now identifies as an evangelical, but he was raised in the Catholic Church; he met his wife at St. Thomas Aquinas, a parish in Indianapolis, and his grandfather was an Irish-Catholic immigrant. Yet Pence publicly sparred with Indianapolis Archbishop Joseph Tobin over Syrian refugees. When the local Catholic Charities agency agreed to help resettle a family last December, Pence asked Tobin to put a stop to it. The clergyman did not oblige.

Pence’s other positions similarly illustrate the challenges of being a Catholic Republican. The governor is a global-warming skeptic, in contrast to the environmentally conscious pope. While the Church has called for immigration reform “with a special emphasis on legalization,” Pence has struggled to reconcile his past moderate positions on immigration policy with the Trump campaign’s strongly anti-immigrant rhetoric.

Two factors in particular help explain this change. First, white Catholics are no longer newcomers in the United States. When waves of Irish and Italian immigrants arrived in the United States in the late 19th century, they realigned partisan politics, said Sprows Cummings—“specifically Irish Catholics and their overwhelming alliance with the Democratic Party.”

Decades later, that long-standing coalition was deeply shaken. “U.S. Catholics have had no political home since around the Kennedy election,” Sprows Cummings said. . . . . This sense of ideological homelessness is arguably responsible for the loss of distinctive Catholic identity among politicians and voters—and for division within the Church itself. “There’s almost a kind of crisis for the Catholic Church in America today associated with the polarization that comes from our political culture, that’s insinuated itself into our pews,”

Like the country, American Catholicism itself is going through period of great change: Once again, it’s becoming an immigrant Church. The share of Hispanic-American Catholics has risen to one-third over the past decade or so, according to Pew Research Center, and more Catholic Millennials are Hispanic than white.

If Donald Trump’s rhetoric is any indication of what’s ahead from the Republican Party, the increasingly Hispanic Catholic population could once again line up as solidly Democratic.

Posted by Michael-in-Norfolk at Wednesday, September 21, 2016