Charlotte Refuses to Be Blackmailed By North Carolina GOP, NCRLA and Chamber of Commerce 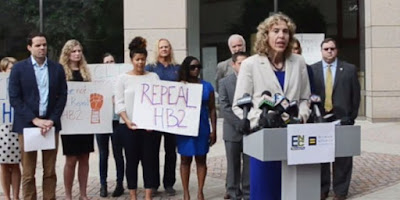 LGBT North Carolinians are quickly discovering who their friends are and who is only to happy to throw them under the bus in the interest of making a buck.  As previously noted, the North Carolina restaurant and lodging workers association is only too ready to cast LGBT North Carolina citizens under the bus.  Working hand in hand with them is the North Carolina Chamber of Commerce which similarly puts money ahead of the rights of minorities.   Thankfully, the Charlotte City Council made it clear today that it will not repeal its ordinance granting LGBT individuals in exchange for the North Carolina GOP's likely disingenuous promise that HB2 will be repealed if Charlotte throws it LGBT citizens to the wolves, or more accurately Christofascists wrapping their hate and bigotry in the cloak of religiosity.  A piece in the Charlotte Observer looks at the City Council's action.  Here are highlights:

Despite pressure from business leaders, Charlotte Mayor Jennifer Roberts said Monday that at least for now, repealing the ordinance that led to House Bill 2 is off the table.

And in a memo, the city attorney said the city doesn’t have to act in order for the General Assembly to repeal HB2. Legislative leaders had made dropping the city’s ordinance a condition for repealing HB2.

“Some people don’t realize there’s no legal reason for Charlotte to do anything, and that’s the point we want to make clear to the community,” Roberts told the Observer.

“There’s going to be discussions that occur down the road,” Moore told reporters in Raleigh. “But the first step for anything is that the Charlotte City Council, which started all of this, has to at least acknowledge and rescind what they did. … And frankly, the mayor of Charlotte could care less what happens with sports.”

The ordinance nullified by HB2 extended anti-discrimination protection to the LGBT community and would have allowed transgender people to use the bathroom or locker room of their gender identity in schools and government facilities.

A Cooper spokesman said the “new round of finger-pointing is ridiculous.”

“The governor needs to stop playing politics with our economy and call a special session to end this now by repealing HB2.”

Supporters of repealing the ordinance had worked furiously over the weekend and Monday to line up votes in favor of repeal. They lobbied three at-large Democrats: James Mitchell, Vi Lyles and Julie Eiselt. It appears unlikely that there are enough votes to rescind the ordinance. Six would be needed unless Roberts vetoed the move. Then it would take seven votes to override the veto.

Like Roberts, council member Vi Lyles said the state doesn’t legally need the city to do anything.

City Attorney Bob Hagemann agreed. In the memo to Roberts and the council, he said the council’s failure to repeal the ordinance “is in no way a legal obstacle or impediment to the General Assembly’s ability to modify or repeal House Bill 2 as it deems appropriate.”

Kimberly Reynolds, executive director of the Democratic Party, said McCrory should “quit holding our economy hostage.”  “The economic damage facing our state is being caused by HB2 – nothing else,” she said.


As for the NCRLA and the Charlotte Chamber of Commerce, I recommend that anyone going to North Carolina - the state should be avoided completely, if possible - do their homework and only patronize restaurants, hotels and merchants who do NOT belong to these associations.  It may take some homework, including contacting hotels and asking the question.  They have shown how little they care about LGBT rights and equality.  Do not spend your money at their members' businesses.
Posted by Michael-in-Norfolk at Monday, September 19, 2016

Even ifHB@ is repealed, a boycott of these hotels and restaurants should continue.