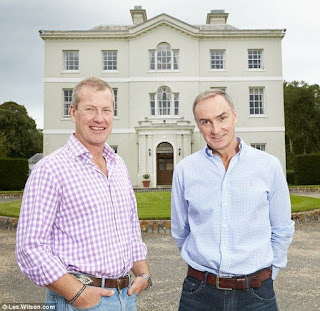 I have to laugh or shake my head when I hear conservatives - especially those of the parasitic professional Christian class - loudly state that they have no gays in their families and/or that a gay child is the result of poor parenting.  Talk about lying to one's self or delusion.  Indeed, some of the loudest homophobes have had LGBT children (e.g., the late mistress of hate, Phyllis Schafly), so, if their claims are correct, they should be the last to give advice to anyone else.  The reality, I suspect, is that most families have (or have had) LGBT members of the family.  Often, the truth simply is not known until some family member simply cannot play the expected role any longer and finally comes out of the closet.  Ask Britain's Queen Elizabeth II whose cousin, Lord Ivar Mountbatten (pictured at left above) has come out as gay.  A piece in  The Telegraph looks at the coming out story.  Here are highlights:

The Queen's cousin Lord Ivar Mountbatten has spoken for the first time about his sexuality and how he has found love.

Lord Ivar Mountbatten, the great-great-great-grandson of Queen Victoria, has told of his happiness with his new partner, James Coyle, an airline cabin services director.

In an interview on Saturday, the divorced father-of-three said: "I was driven into the closet by not wanting to come to terms with who I was and facing friends and family in the early years. I buried it.

"I’m just so pleased now to have found someone who I am happy to call my partner."

The 53-year-old, the great-nephew of Earl Mountbatten of Burma who was murdered by the IRA, has told his family and friends he is gay and has introduced them to his partner, whom he met while skiing in Verbier, the Swiss resort, last March.

Speaking of his decision, he told the Mail on Sunday: "Being a Mountbatten was never the problem, it was the generation into which I was born. When I was growing up, it was known as 'the love that dare not speak its name', but what’s amazing now is how far we have all come in terms of acceptance.

"'Coming out'” is such a funny phrase, but it’s what I suppose I did in a rather roundabout way, emerging to a place I’m happy to be. I have struggled with my sexuality and in some ways I still do; it has been a real journey to reach this point.

"I was driven into the closet by not wanting to come to terms with who I was and facing friends and family in the early years. I buried it. I even had girlfriends as I tried to work out what I wanted to be.

He says his former wife Penny, whom he divorced in 2011, and their three daughters have been very supportive and have welcomed his partner into their lives.

"I am a lot happier now, though I am still not 100 per cent comfortable with being gay," he added.

"In an ideal world, I know the girls would like their mother and father still to be together, but they love their 21st-century family that we have built, too. Their father has a boyfriend. It’s that complicated and that simple, but finding James means I will not have to lie to anyone or grow old on my own."

Having been married to a woman and having three children myself, I know how difficult of a time he must have experienced.  The reality, however, is that so of us are born LGBT.  We can struggle to deny it, but we cannot change that reality.  Sadly, while in denial we often merely make ourselves and others miserable - something that doesn't seem to matter to the "ex-gay" charlatans.
Posted by Michael-in-Norfolk at Monday, September 19, 2016

Email ThisBlogThis!Share to TwitterShare to FacebookShare to Pinterest
Labels: coming out, gays in the family, honesty and self-acceptance, life in the closet, Lord Mountbatten, Queen Elizabeth II