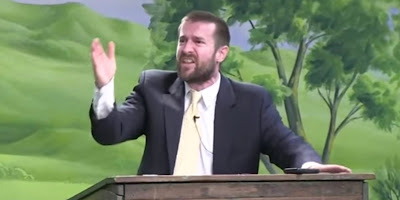 Sadly, here in America, religion gets huge amounts of undeserved deference.  Hate is allowed to parade in public and "men of god" are free to encourage violence against others.  Equally disturbing is the manner in which politicians, especially Republicans, prostitute themselves to hate merchants standing behind a pulpit and by default normalize the misogyny they advocate.  Thankfully, in deporting anti-LGBT U.S. pastor Steven Anderson the government of Botswana demonstrated how such foul individuals should be treated. No deference, no respect, and no platform to poison others with their hatred of others. The Washington Blade looks at Anderson's deportation.  Here are excerpts:

The government of Botswana announced on Tuesday it has deported an anti-LGBT U.S. pastor from the country.

Steven Anderson told a Botswana radio station during an interview on Tuesday that the government should kill gays and lesbians. He also described the victims of the Pulse nightclub massacre in Orlando, Fla., as “disgusting homosexuals who the Bible says were worthy of death.”

Botswana immigration officers were with Anderson when he left the radio station.

Lesbians, Gays and Bisexuals of Botswana said it received a report that Anderson assaulted someone who attended his church service on Monday. The advocacy group wrote on its blog that Anderson called the person “a fag, a homosexual and with a mouth full of AIDS” before he was forcibly removed.

Anderson, who is a pastor at the Faithful Word Baptist Church in Tempe, Ariz., arrived in Botswana on Sept. 15. The government of neighboring South Africa announced earlier this month that it had banned him from entering the country.

A State Department official referred the Washington Blade to the Botswana government for comment “on their policy regarding individuals affiliated with the Faithful World Baptist Church.”

Note that South Africa banned Anderson from entering that nation.   Perhaps one of the biggest ironies is the way Christofacists condemn the Koran and say it's a message of hate, yet then cite the Old Testament of Bible - also a message of hate - to justify similar bigotry and violence.
Posted by Michael-in-Norfolk at Tuesday, September 20, 2016