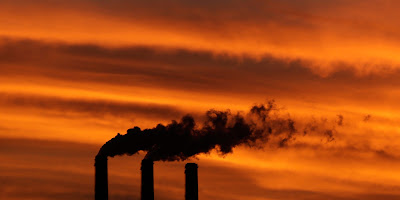 The Hampton Roads region is finally coming out of a period of widespread flooding on the par with what one would normally expect during a hurricane direct hit or close encounter.  Yet, there was no hurricane.  Just steady rain for numerous days in a row combined with high tides - combined with rising sea levels - that block storm drainage systems from doing their jobs.  And it was just Norfolk that suffered major flooding.  Virginia Beach, Portsmouth, Chesapeake and other cities were stricken. Indeed, schools were closed because of the impassable nature of many roads.  All is proof positive of the reality of climate change.  Despite such objective proof, Republicans and Donald Trump in particular continue to push policies that will lead to climate disaster.  A piece in Think Progress looks at the terrifying policies favored by liar and vulgarian in chief, Donald Trump.  Here are excerpts:

On Thursday, Donald Trump spoke before an audience full of natural gas and energy industry leaders — and the message was exactly the same as his economic policy proposal from last week: fewer environmental regulations and more land available to fossil fuel companies.

If elected president, Trump has pledged to revoke both the Clean Power Planand President Obama’s Climate Action Plan, the cornerstones of Obama’s domestic climate agenda, and important signals to the international community of the United States’ commitment to climate action.
Trump has also promised to roll back the Waters of the United States Rule, which would extend drinking water protections for millions of Americans. Instead, he said that he would redirect the EPA to “refocus…on its core mission of ensuring clean air, and clean, safe drinking water for all Americans.”

Trump does not seem to understand that regulations he so deeply wants to cut are crucial to preserving clean air, and clean, safe drinking water for all Americans.

Beyond rolling back crucial protections, Trump’s speech on Thursday showed that he does not intend to back down on his policy proposal that would open up vast regions of the United States to fossil fuel production.

Posted by Michael-in-Norfolk at Friday, September 23, 2016