Wall Street Begins to Freak Out About Donald Trump 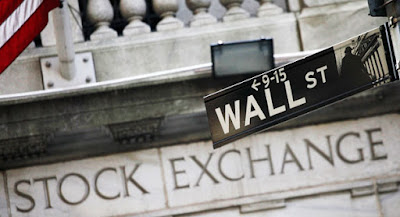 With some polls showing a tightening in the presidential race, Wall Street, which seems to have never believed Trump could be actually elected, is beginning to freak out at the thought of a Trump presidency and the disaster that it would unleash on the financial markets, international trade and a host of other issues.  The irony is that Trump claims incessantly that he is such an amazing businessman, yet by many reports he is being propped up by Russian monies from questionable sources and Wall Street sees him as not being up to the task of the presidency.  A scripted reality TV and running a super power are vastly different, not that the narcissistic Trump seem able to grasp the difference.  A piece in New York Magazine looks at the growing angst and fear on Wall Street.  Here are highlights:

The U.S. stock market, seven years into an almost nonstop bull run, went on a wild ride last week: The Dow Jones Industrial Average swung between 100 and 200 points — up one day, down the next — on four separate days. There hasn’t been such a bout of volatility since late June, when the U.K.’s surprise vote to exit the European Union sent markets on a roller-coaster ride. Volatility is not just apparent in the stock market either. Wall Street strategists say it’s also cropping up in the bond and foreign-exchange markets.

Global markets are jittery about many things right now, but one fear seems to override all others: The polls in the presidential race have suddenly tightened, and Donald Trump might actually become president of the United States of America — with unknown, but possibly very negative, implications for everything from trade policy to foreign relations to monetary policy.

Société Générale analysts call it the “Trump factor.” They argue that the tightening of the polls between Trump and Clinton is a big reason for a sell-off in global bonds in September, which has led to the unease in equity markets, Bloomberg reported on Tuesday. Rates on both long-term Treasury and Japanese bonds have been rising since the polls started tightening, SocGen says.

A tightening of the race is normal, and might seem inevitable after the huge lead Clinton took following the Democratic National Convention and the Khizr Khan affair. But investors seemed to start selling when Trump took the lead in the crucial swing states of Ohio and Florida.

In general, markets prefer a Clinton victory. In a new CNBC survey of economists, fund managers, and strategists, 53 percent think Clinton is better for the stock market than Trump — because she’s a known quantity, and a person whose ability to relate to foreign leaders is comforting. Only 26 percent of those surveyed think Trump is better for stocks, down from 32 percent the prior month. Some market prognosticators have suggested a win by Trump could send the stock market down at least 10 percent.

“I don’t know what the U.S. dollar is worth with a Trump victory. I don’t know what it does to foreign flows into the U.S.,” says Josh Brown, CEO of financial adviser Ritzholtz Wealth Management. “Are foreign corporations as desirous of owning US dollars with someone so erratic in the White House?”

[T]he concern on Wall Street is whether or not Trump knows what he is talking about — or even cares. In recent weeks, for example, he has been bashing Fed Chair Janet Yellen, blaming the Fed for creating a “false economy” and an “artificial stock market” in an interview with Reuters, saying the Fed needs to raise rates. But Trump also says the economy is a disaster. “Which is it?” asks Brown, noting that if the economy is truly a disaster, rates would need to stay low. (Trump also changes his mind a lot, which Wall Street doesn’t like. This spring, he said raising rates would be “scary.”)

Wall Street economists have long warned that a Trump presidency could increase the chances for a recession. In an August 25 research note, Citigroup chief economist Willem Buiter wrote that “a Trump victory could prolong and perhaps exacerbate policy uncertainty and deliver a shock (though perhaps short-lived) to financial markets. Tightening financial conditions and further rises in uncertainty could trigger a significant slowdown in U.S., but also global growth.”

Despite such fears, the ignorance embracing Christofascists, white supremacist and economically challenged white males are putting their hopes in a vulgar carnival barker.
Posted by Michael-in-Norfolk at Thursday, September 22, 2016

Surprisingly, or maybe not so much, there was only an almost imperceptible ripple when shortly after TaxCheat Trump won the nomination, he suggested that one way to deal with the debt was by threatening to renege on payment of government bonds unless major creditors, like the Chinese and Social Security, agreed to write them down. Sort of like Argentina ... or the United States under the Articles of Confederacy .... or many hundreds of people who have made the mistake of doing business with the piece of trump.